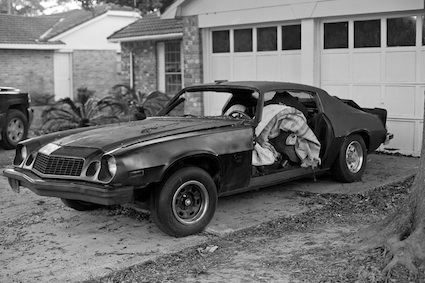 Like the intuitive and abstract connections we made as teenagers trying to make sense of that space between childhood and adulthood, Barry Stone’s exhibition Hum at SOFA Gallery functions as a clue or possible key to a personal and collective past. A nostalgia for Heavy Metal music and all the gender contradictions of 1980’s bands like Iron Maiden, Van Halen and Mötley Crüe are juxtaposed with references to 70’s feminism, suburban sprawl and the unexplored wilds of nature. 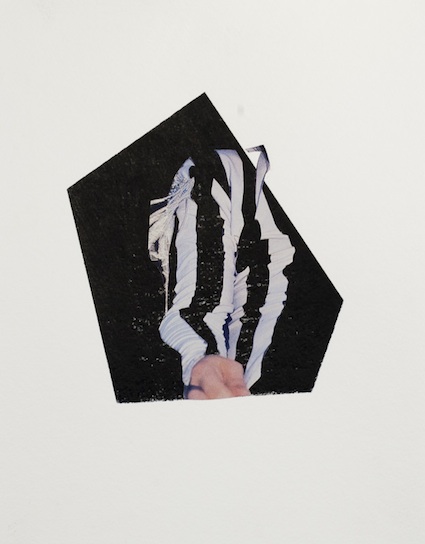 Artworks in this exhibition like Nikki Sixx and Ink Polygon seem to be from the perspective of someone inside the narrative while others like the inkjet print Dinner Party, Spring, TX seems to be from someone momentarily looking in, as witnessed by the reflection of a window in the image of the framed poster’s surface. The pairing of these two works reveals a connection between observer and observed –the abstract form of an elongated polygon. It is a shape repeated and reversed in many of the works in Hum that ties all disparate things together, closing the distance between things that appear to be but are not isolated. For instance, the testosterone infused drag-like persona of Nikki Sixx of Mötley Crüe and the unabashedly feminist The Dinner Party by Judy Chicago. Neither the individuals nor their actual work are present in Stone’s photos and drawings but a glimpse or a fragmented memory of these cultural icons from our past are. 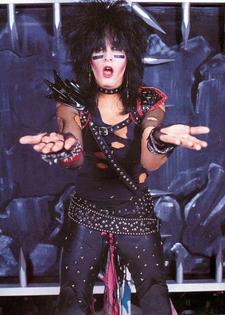 With high and low references to the history of photography and painting (abstract vs. realism), metal and ballad music, suburban decay and the beauty of the great outdoors, this exhibition is filled with contradictions and personal connections that reference the maker but reach beyond into a collective 80’s adolescence. One filled with expected growing pains reflected in a national anxiety about coming to terms with “traditional” American roles of gender identity and sexual preference. Proving that the ubiquitous 1980s reruns of Leave it to Beaver were actually far from the norm. Reality was based in Reagan and the AIDS crisis, shows like One Day at a Time, and not just feminist women but more and more single Moms raising kids on their own. 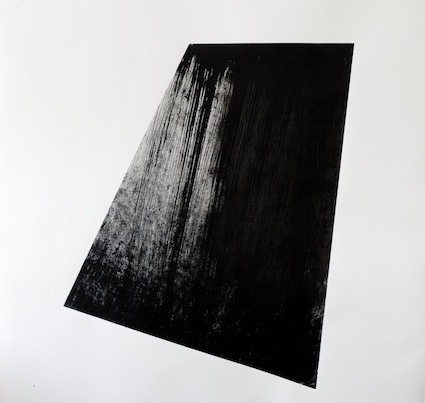 Distorted Rectangle, a sumi ink drawing, is another example of a contrast between what is known and what is not. The strong and fluid marks hitting up against an unmarked page, forming a border of potential transition much like the awareness of a teenage boy who can only know so much based on his experience but will later realize he knew much more in hindsight.

With work in AMOA’s New Art In Austin, a book release from his collective LAKES WERE RIVERS and his solo show Hum at Sofa Gallery, Barry Stone is one of the hardest working artists in Austin. Opening night of Hum included a chance to hear Not for Teacher, three tracks that Stone wrote himself, bringing back his days in a band and connecting them to his current career as a multitasking artist. The cd is included in a sixteen-page full color catalog that accompanies the exhibition. Visit SOFA’s website for more details or to make an appointment to see the show which closes April 9, 2011.