Located along Allen Parkway at Montrose, Tolerance is a series of seven sculptures mounted on large rocks. Each is approximately ten feet high and in the shape of a kneeling figure. The figures are formed from thin sheets of stainless steel cut out into patterns of letters and characters assembled from an international range of languages. This “alphabet mesh” is a “signature” material for Plensa. As one viewer remarked “It kind of looks like that ‘coexist’ bumper sticker.” But that same viewer liked the work, and many people do, especially if they view it while driving by at night when the sculptures are lit up. 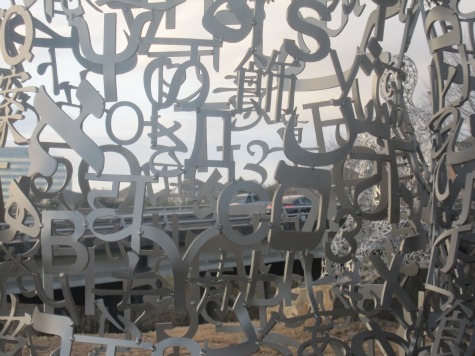 Detail of Tolerance, the sculpture

In Plensa’s project rendering, the figures look like levitating, meditating aliens, the kind sent to show humankind a better way. But in the rendering it also appears that they are sited at different levels moving down toward Buffalo Bayou. As installed, they are kind of strewn along Allen Parkway, a couple of them under live oaks. They remind me of the Buddha-lite bric-a-brac you might have decorated your dorm room with in college. And the boulders that act as bases don’t help the effect. (BTW, according to the Houston Arts Alliance press release, the rocks were “hand-selected by the artist in his native Spain.” Because, um, we don’t have rocks in Texas? That’s a lot of weight to ship halfway around the world – I’m thinking they aren’t going for LEED certification.) 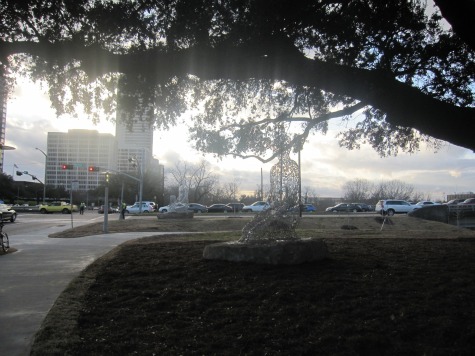 In addition to being oddly sited, Tolerance is filled with heavy-handed symbolism. The “alphabet mesh” of Plensa’s figures is obviously supposed to convey a multitude of cultures. The seven figures are supposed represent the seven continents. And the hokey combination of the two is supposed to inspire us to tolerate each other? The figures themselves just aren’t that interesting, their design really isn’t that far off from the “ethnic” decorator items you find at mass-market importers like World Market or Pier 1. Then you have seven of them along the side of the road. One really big figure might have been better, but it may have looked a little too deity-like.

The Tolerance project originally began as the Tolerance Bridge, a planned pedestrian bridge over the Buffalo Bayou near Montrose. The original proposal had a bridge with a mobius-strip-like hump designed by Elmgreen + Dragset. It looked so much like a skate park that when the plan was unveiled to the Houston City Council, they were immediately concerned with how to keep skate boarders off of it. What relationship the bridge design (which intentionally looked impassable when viewed from the side) had to the concept of “tolerance” was lost on me — and others. And city officials ultimately wound up objecting to the name “Tolerance.” One can see why: “tolerating” someone or saying something is “tolerable” implies a resigned acceptance. 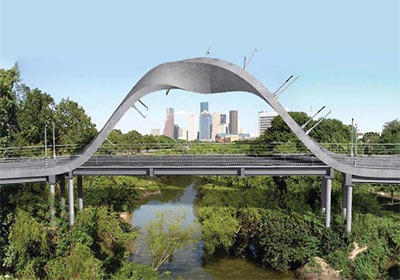 Eventually the bridge design was scrapped for financial reasons — along with the name. (There is now a simpler and nearly completed bridge at the site, the SWA Architects-designed Rosemont Bridge.) The idea of celebrating tolerance moved forward, however, ending in the Plensa work.

The public art project was the brainchild of philanthropist Mica Mosbacher. The idea was born in the wake of a horrific 2006 hate crime in Spring, Texas. Sixteen-year-old David Ritcheson was severely beaten and sodomized with a patio umbrella by two other teenagers while they yelled racial slurs at the Latino youth. After a lengthy recovery involving 12 surgeries, Ritcheson courageously went to Washington, D.C. to testify before Congress, advocating tougher hate crime laws. When it seemed the story couldn’t become any more tragic, Ritcheson, who had refused counseling, committed suicide. Little more than a year after the attack and three months after testifying, the teenager jumped from the deck of a cruise ship.

In an interview posted on Faboverfifty.com Mosbacher talked about the wanting a “civic art piece that would depict tolerance, harmony and diversity in Houston.” It’s admirable to want people to accept each other. It is also admirable to try to create something that conveys that sentiment. But you are asking for trouble if you tell an artist to “depict” qualities like “tolerance, harmony and diversity” and name the resuling work “Tolerance.” 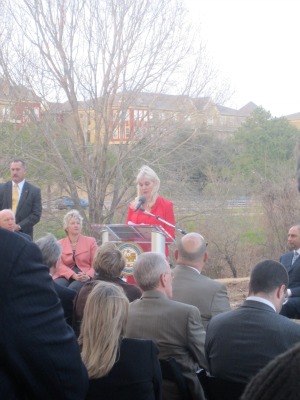 Using art to illustrate what people should feel is rarely successful. It might have worked with the Pieta, but it hasn’t worked lately. Maya Lin’s Vietnam Veterans Memorial is immensely effective and heavily visited, and totally abstract. By not explicitly trying to evoke emotion, it succeeds in doing just that — unlike Frederick Hart ‘s maudlin bronze soldier sculpture Faces of Honor, placed nearby. 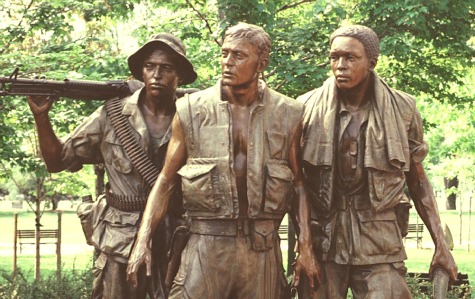 Closer to home, consider the Richard and Annette Bloch Cancer Survivors Plaza. I ranted about it at length in 2003 piece for Art Lies but basically, cancer survivor and H & R Block founder Richard Bloch decided he wanted to inspire and convey hope to others suffering with cancer. One of the ways he chose to do it was through a series of Cancer Survivor Plazas, each with the same Victor Salmones sculpture. Houston’s sculpture is in the median off Fannin near Hermann Park and I want to run my car through it every time I see it. It’s a figurative bronze of badly modeled, 2/3-life size people, old and young, all skipping through a giant spring-like shape. It’s supposed to symbolize people successfully moving through cancer treatment. I appreciate the intended sentiment, and while cancer is awful, so is that sculpture. (The exact same crappy piece on view in Houston is also on view in a number of other plazas around the country; it has perpetuated itself because what city official is going to come out against a park for cancer survivors?) 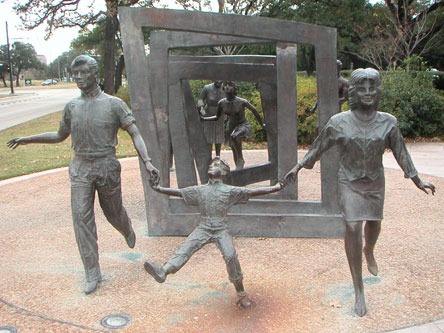 Although Tolerance has some ham-fisted symbolism, it is a thousand times better than the cancer plaza. But if you look at some of Plensa’s other public art works, it doesn’t seem he broke a sweat coming up with this one. The “alphabet mesh” had been used it in similar public sculptures titled things like “Body of Knowledge.” And the seven figure/seven continents thing appeared in Conversation à Nice. Every artist has their visual language, but it feels like a lot of Plensa’s public work – Tolerance in particular – consists of cranked out variations on themes.

One notable and phenomenal exception is the Crown Fountain at Chicago’s Millennium Park, an almost universally lauded piece. The work has two 50-foot glass block towers that face each other across a granite reflecting pool. Giant video of the faces of more than 1000 Chicago residents alternately appear on LED screens on the towers. The photos reflect all ages, races and ethnicities. In warm weather, water squirts from their mouths onto the granite below and people lounge and play in the reflecting pool. The work is an artistic and civic success. In an article in Chicago Now, artist Dawoud Bey wrote of the project, “It is one of the most fully integrated social spaces I have ever seen in this town. The sense of ownership that everyone seems to have for the space suggests what public spaces and public art can be in the best sense.” 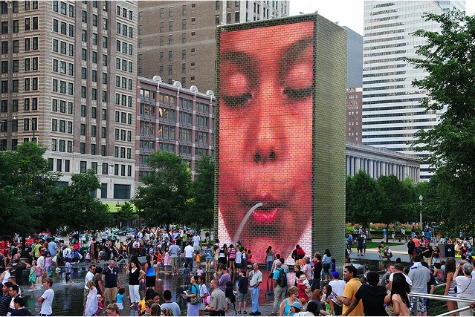 If we were going to get a variation on a Plensa theme, I wish we could have gotten one of those. Because the Crown Fountain far more successfully communicates a sense of “tolerance” than the hackneyed kneeling figures of Tolerance. Admittedly, the fountain came with a $17 million price tag. But successful public art requires ambitious vision, which also means money, if it is to become the symbolic, huge attraction that cities want. Houston has not even come close to stepping up to the plate for serious public art – the kind that becomes a symbol for a city’s greatness, that generates decades of tourism and marketing dollars. And the ho-hum Tolerance is just the latest example of the milquetoast trend.

It’s great that people are willing to work hard and give generously to realize a public artwork. And God knows there is much worse public art out there, but it should be so much better. In the end, the art world/private donor/public sector machinations that resulted in Tolerance may not have been Plensa’s fault: even the best ideas can go awry in the world of public art, where there are always too many cooks in the kitchen. As evidenced by his Crown Fountain in Chicago, Plensa is capable of stunning work. Tolerance just isn’t it.

This is a fine piece of criticism on some Public Art in Houston. Thank you, Kelly. Revealing the duplicity of the “Tolerance artist” needed to be put out there besides noting a complete total failure, a maudlin failure and a failed design for comparisons with a solid winner.

[…] Originally Posted by RedRage Actually, the Aga Khan himself donated a generous sum towards the project. I assume other philanthropists must have contributed to some degree as well. Actually, the Houston Arts League was part of the project so city taxes did fund at least some of it. It is also located on City property. Read this review: Tolerating “Tolerance” […]