Since 1992, I’ve lived around the corner from a convenience establishment called Al Quick-Stop. It’s owned by Zak El Saadi, a rather handsome Lebanese man of whom I’ve always been awfully fond. Since his brother was shot and killed in a holdup in the store, all the shifts that Zak doesn’t work have been handled by one or another of his many nephews.

That guy’s got a million nephews.

A fresh one arrives from the mother country every six months or so, and each seems to be pursuing an engineering degree at the University of Houston, mastering the English language, and working the graveyard shift.

After 9/11, all of them, fearing they’d be taken for terrorists, wore nervous grins and tee shirts that said, “I Love the USA!” and “These Colors Don’t Run.”

I‘m pretty sure they didn’t understand what that last one meant.

While many of the nephews mysteriously came and went, one of my favorites, Walid Dahshe, or Willie, became a permanent weekend-shift fixture. Like the rest of his cousins, he was studying to be an engineer at UH. Discussing our respective projects became a tradition. 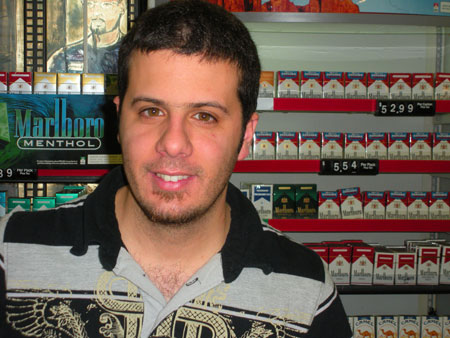 One Saturday afternoon in 2003, after I inquired about his studies, Willie threw up his hands. “I’m in this class,” he moaned. “We’re supposed to reproduce a work of art. I don’t know what to do.” Leaning across the counter, he said, “You’re an artist. What should I do?”

I handed him a buck for my Diet Coke. “What kind of art are you supposed to reproduce?”

“Can it be anything?”

I opened my Coke and looked at him. No way was this guy gonna whip up a rendition of Starry Night.  “I’ll think about it,” I said, and walked out the door.

As soon as I stepped outside, an idea slapped me as hard as the blast of Houston humidity. I remembered a piece from a 1997 series—one of my favorite artworks of all time—“Untitled Straw Dispensers” by Houston artist Bill Davenport. I had seen one of the “Dispensers” in Davenport’s untitled solo show (referred to by the artist as “The ’97 Show“ or “The Shelf Show,” as the art works were installed on little wall shelves throughout the space) at Kerry Inman’s Houston gallery.

I rushed back inside and described the “Untitled Straw Dispensers” to Willie. I was not surprised when he sat on his stool behind the counter and said, “You’re serious.”

Quality contemporary art is so difficult to convey to the uninitiated. I assured him that I was, indeed, serious.

With my usual wild gesticulations, I described how to construct the piece:
1.    Take one plastic half-gallon milk jug
2.    Cut a hole out around the plastic handle
3.    Put a bunch of straws in it.

“That’s it," he nodded, brow furrowed. I went home.

Weeks passed. I made my regular trips to Al Quick Stop, made casual conversation with Willie when he happened to be working, bought my usual bag of ice, Diet Coke, or pack of cigarettes. He never mentioned his project, and I had completely forgotten about it.

One morning I stood at the counter and Willie greeted me with a big grin and a couple of those air-punches over the head that so many people are prone to doing. “I got an A!”

“Wow! Good for you!” I leaned over the counter to pat his back. “I want to see your replica!”

Willie knelt behind the counter and returned with his project. He placed it by the cash register. “I got an A,” he said again.

I stared. Before me was an empty pint half-and-half carton. Jutting from its top were several small narrow straws—the swizzle kind, used to stir coffee. The straws stuck out from the top in all directions. Not all that bad, but definitely not one of Bill Davenport’s “Untitled Straw Dispensers”

“Well…yeah.” I carefully picked up the piece to examine it. “You got an A.”
I went home and decided that Bill Davenport would probably find the whole thing pretty amusing. I sent him an email, describing the incident. A few days later, I received a response.

He was delighted by the story.

He wanted the piece that Willie had made.

I had to wait until the following Sunday to catch up with Willie. I asked him if he would mind giving his replica to the artist who had made the original “Untitled Straw Dispensers”

Willie shrugged, “I threw it away.”

He tapped his head with his forefinger and rolled his eyes. “It’s garbage, okay? I throw it away!”

I emailed Bill with the sad news. Unfazed, Davenport asked if Willie could remake it. I envisioned what proposing this to Willie would be like.

I asked Bill if it would be okay if I made a copy of Willie’s replica of his work. I just didn’t want to deal with convincing Willie to remake his remake. Davenport said that would be fine.

I remade Willie’s “remake” of one of Bill Davenport’s 1997 “Untitled Straw Dispensers.”

Bill Davenport may or may not still have my remake of Willie’s remake. He is, however, still in possession of a few of his “Untitled Straw Dispensers”

At this juncture, one might turn to ponder the philosophical issues that bedevil the appropriation of art works. One might also take up the vexed relations between linguistic communication and visual culture, or, more globally, our inability to make ourselves understood. It was, after all, my description that led to such a skewed end product.

But talk is cheap. Instead I will remake from memory, for the purpose of this article, one of Bill’s “Untitled Straw Dispensers.” I will also remake my remake of Willie’s remake of the original artwork. 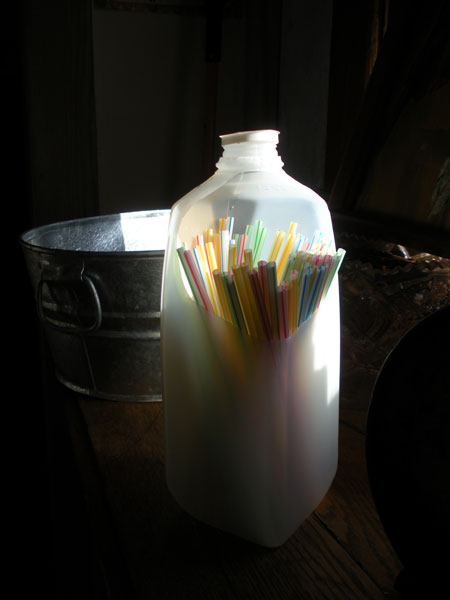 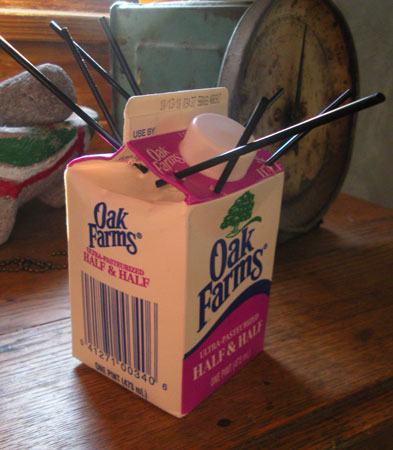 Feel free to try this at home.

Laura Lark is an
artist and writer in Houston.

Nice work-both the art and the writing. My son lived on marshall st. for several years and would walk to a local Quick Stop for beer and cigs. The Al Quick Stop might be the same store. He became casual friends with several of the Lebanese workers/owners.
Stan Bohon in Lufkin