by Margaret Meehan August 22, 2010
FacebookTwitterEmail
I was a good student. I went to a good high school in the most affluent county in Pennsylvania. I took AP classes up until my senior year. For all intents and purposes I should have gone to a "good" university like most of my peers. But – would have, could have, should have – life happens and I ended up in community college otherwise known as grade 13. Ironically thirteen later with an MFA and an emerging art career I moved to Dallas from NYC and felt like a party crasher wherever I went. I slowly settled into the local art scene, making the rounds, introducing myself and learning that the community colleges in Dallas were the most active and vibrant alternative spaces the area had to offer. It made sense since most of the gallery coordinators at these schools were and are themselves artists who need to work, so these are competitive jobs in a competitive market. It can be hard moving cold to a new city, starting from scratch in a world where connections count. But you want to believe in integrity and that if you make good work, then good things will follow. 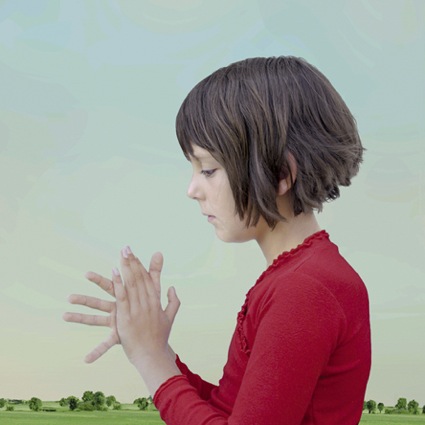 
David Newman at Brookhaven College gave me my 1st solo show in Dallas. Maybe 5 people came out on that Sunday afternoon, including my husband, but images of that show would lead to my working with Mulcahy Modern Gallery. A small solo show at Eastfield College, which had around 15 people at the opening, lead to my being part of Pretty Baby at the Modern Art Museum of Fort Worth. I was the only Texas artist among Yoshitomo Nara, Catherine Opie, Miranda July, Natalie Djurberg and Rineke Dijkstra to name a few – not too shabby for an installation that had its beginning in a 2 year college art gallery. Eastfield College was also my first teaching job outside of graduate school. While some advised not showing or working in such institutions, I cannot say enough for the part community colleges and the people who teach at them have played in my life. As a student, a teacher and an artist I owe them much for my good fortune. I took each opportunity seriously and expected nothing in return other than a chance to be ambitious and get my work outside of my studio walls. The fact that they were non-commercial venues gave me the freedom to push boundaries, try new things, and not be pressured about sales.  It is for these reasons that I consider the DFW Community College systems to be an equivalent of what usually happens at nonprofit and alternative spaces in other cities. I’m not sure why this isn’t true in other cities, as far as I know it isn’t. But in DFW the work at these galleries is consistently challenging and is a window on emerging, established, and transplanted artists to the local art scene. This month a few shows carry on an important part of this art ecosystem offering not only art but also discourse and a sense of community for students and non-students alike.

Richland College has had an ambitious program whose quality of work continues to grow with each new exhibition. The current show is Modular. It explores the possibility of mathematical and architectural discourse among 3 artists, Eric Eley, Patrick Schneider, and David Willburn. The work plays with form through architecture within the narrative of each artist’s personal exploration of space. 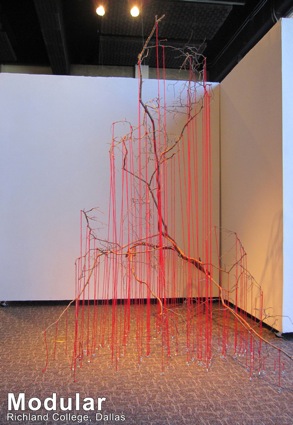 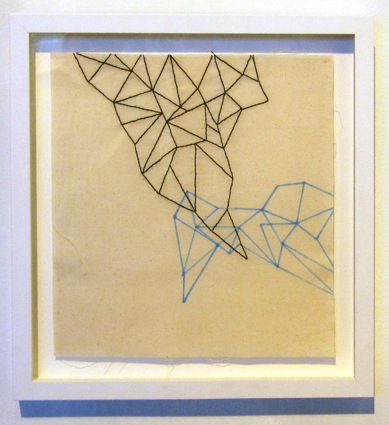 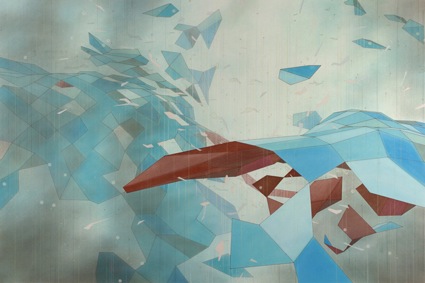 Patrick Schneider’s large wall hanging structure built from wood and twine is a particular favorite.  Modular runs from August 5 through August 26, 2010. Richland’s gallery is open Monday through Friday from 10 a.m. to 4 p.m. For viewing outside of these hours contact the Gallery Coordinator Ryder Richards…aka artist Ryder Richards whose own work can be seen this month in Trajectory at Third Space Gallery.
The artists will be giving a gallery talk on Thursday, August 26th from 12-1pm. 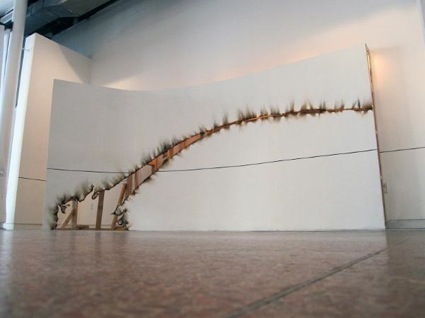 
Opening this Friday from 6-8pm at Brookhaven College is Sculpture by Tom Orr in the Forum Gallery and Prints by Sally Warren in Studio Gallery. The exhibitions are up till September 29. Tom Orr shows at Marty Walker Gallery and he and his partner Frances Bagley were recently seen at the DMA in the exhibition Performance/Art. 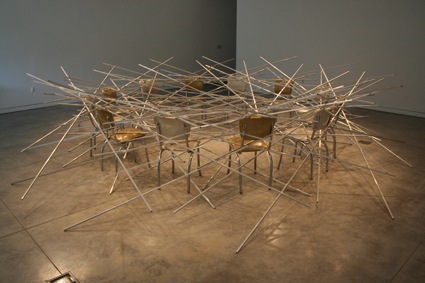 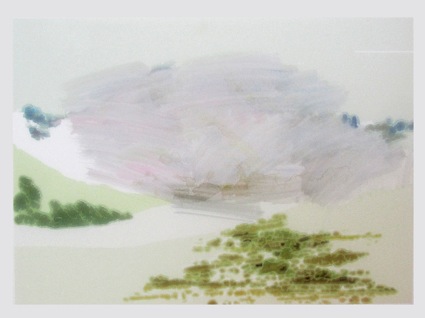 
There is no reason for an artist at his level to show at a community college, but in Dallas he does. I’m guessing because the space is beautiful and having the opportunity to experiment, play and make work on a larger scale than he is able to in his current gallery is too powerful. How lucky are the students that stumble into this show? 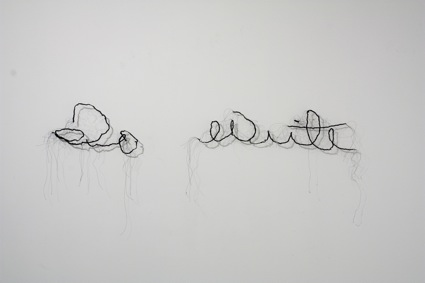 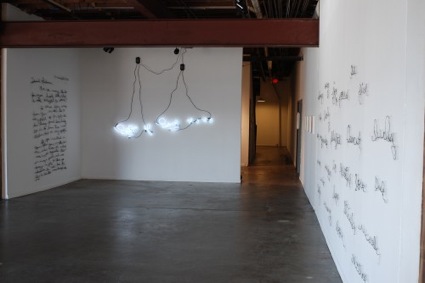 Rebecca Carter’s Friendliness Towards all Things or I Also Read (this) (into) What You Wrote also opens this Friday August 27 from 6 – 8 pm at Eastfield College in Gallery 219. Michael Corris, artist and writer, will lecture at the reception at 6pm in conjunction with her show.  Using historical documents (letters, photographs, drawings, events) as source materials, Carter explores the “collision between subjectivity and knowledge”. Known for her thread drawings, the work is a labyrinth of beautiful and fragile lines colliding to make textual sense of the world. Eastfield’s Gallery Coordinator Iris Bechtol, following in the footsteps of former director David Willburn, is yet another example of an active artist running a contemporary space under the guise of an unsuspecting community college campus.