Aaron Parazette at Dunn and Brown 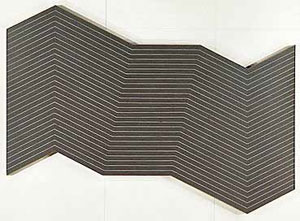 The shaped canvas in contemporary painting has always irritated me. Simply because, for the most part, it seems to cry, “look! I’m making painting interesting and current and trying to make it matter in a world that doesn’t really care about painting that much!”

It’s easy to forgive the pioneers of this practice in post-war modern art, especially in select pieces by Frank Stella and Ellsworth Kelly, where every once in a while the altered construction of the canvas coincides in an essential and spatial manner with the contents within.

Stella’s success with this practice was spotty, though, and often when I look at these pieces I can only appreciate them for their novelty. But considering the zeitgeist, I tend to be forgiving. Culottes seemed like a good idea at the time, too. 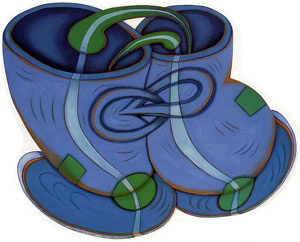 I lose patience, however, with painters who’ve indulged in this practice in recent decades. Elizabeth Murray’s work is always energetic and whimsical, and it’s easy to see why it’s a natural impulse for her to want to break away from the traditional format, since she also works in ceramics and installation. But there doesn’t seem to be much point in her making canvases in the shape of coffee cups and saucers. There’s a paper cut-out/jigsaw puzzle-piece element to these works, but the shape doesn’t add much to these endeavors as painting. Like those rubber adhesive mod-looking flower things you can stick on the floor of the bathtub: wackier than the conventional narrow strips, but not worth paying much attention to after a couple of trips to the shower.

In a similar yet more grating fashion, Greg Bogin puts a rounded spin on the conventional geometric canvas. But I’ve recently become more tolerant of his work (I think I likened his previous attempts to the “New Coke” in an old blog post), as his compositions seem to have become more symbiotic with the shapes of his canvas. However, like nearly every artist I’ve seen in Leo Koenig’s Projekte (obviously a space with a great deal of purpose—it’s not just a gallery; it’s a PROJEKTE!) Bogin’s work screams bad-boy hot-shot immaturity—more an attempt to shock or electrify than to say anything substantial.

So that’s where I’ve stood on the subject of the canvas of shape: a nice stab at novelty, with little point. Having recently seen Aaron Parazette’s Snow White Tan in the project space at Dunn and Brown Contemporary in Dallas, however, I stand corrected. [Full disclosure: Parazette is a Glasstire board member.]

Parazette’s work has always been playful, tinged with an irony that served as a sly wink to the viewer. The meticulously crafted and precise “graphic splash” paintings; his “text” paintings crammed with jumbled and incomprehensible surfer lingo; this artist’s works whimsically and generously invites the viewer to ponder the nature of paint and the history of painting while having a pretty good time.

What is most unexpected in this new body of shaped canvases (offset by two large site-specific wall paintings), though, is how well the artist integrates color, composition and shape to create gemlike abstractions (none are larger than 40 inches) that are electric, animated, yet fully address the history and contemporary relevance of the painted canvas. 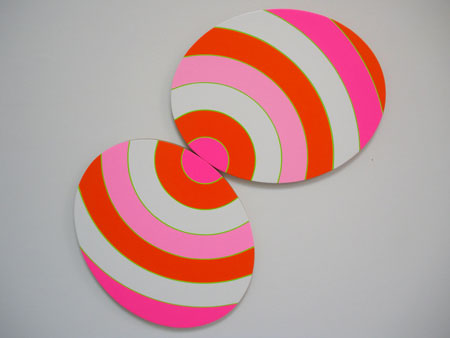 The finest example of this is Color Key #6 (2009), two separate oval canvases that lean toward and just barely touch each other. The off-kilter placement alone presents an interesting composition, but it is Parazette’s skill as a colorist that not only brings this piece to life, but practically sets it to bouncing off the wall.

A circle of shocking Barbie-pink connects the canvases at their point of contact, and then radiates separately into fat, curving stripes of a softer pink, more Barbie-pink, and an electric cadmium red-orange. The juxtaposition of pinks and red-oranges creates a crazy, op-art dynamic, but this is significantly heightened by ultra-thin, strategically-hued ribbons of bright green placed between each stripe.

The joining ovoid shapes, the composition, the color choices and placement: all are integral to one another. The combination transcends the individual elements to create a painting that is also a sculptural object, an abstraction that suggests a narrative in its movement. Are the shapes coming together or splitting like atoms?
Whatever the case, this painting is mesmerizing and the effect is mind-boggling. Stare at the piece long enough and things start to move. It’s hard to determine whether one is looking at a couple of the wildest Easter eggs ever fashioned, or rather at a pair of crazily rotating cartoon googly eyes. 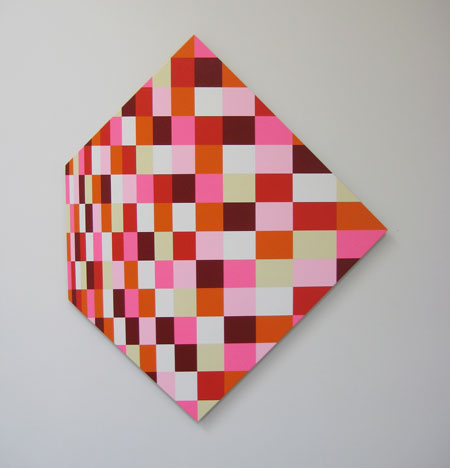 Similar in effect, but all angles instead of curves, is Color Key #18. Hung opposite #6, it seems that it might be a perfect diamond whose left point has been unfortunately lopped off. Of course, considering that Parazette’s canvas supports are crafted more or less to the standards of high-end living room furniture, there is nothing haphazard going on here.

A grid of elongated rectangles becomes compressed as it moves toward the lopped-off left side of the canvas. The blocks of dark, earthy red and a warm cream tone are pitted against the bright reds and fluorescent pinks. Here too, the painting works as a whole, creating something that feels animated and almost narrative. The effect is of a perpetual sliding motion to the left, yet despite the hard edges, the perceived movement is oddly fluid. 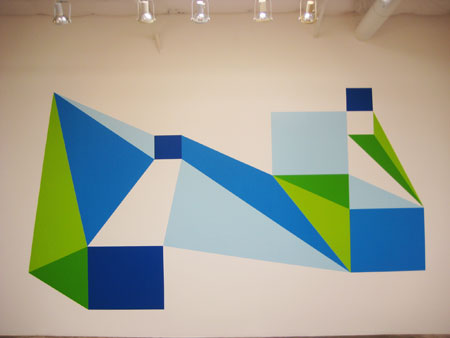 The geography of Snow White Tan is as successful as the works themselves, and it’s the site-specific wall paintings, the blue and green Dawn Patrol (96” x 178”) and Evening Glass Off, of pinks and brown tones, that, to use a cliché, “really tie the room together.” Executed on opposite walls, these works have the feel of ‘70s graphics and interior décor, and they showcase the same color scheme used in the paintings. However, in contrast to the small-scale works, here the electric hues and crazy angles are somehow calming rather than frenetic. Hence, perhaps, their titles: Evening Glass Off and Dawn Patrol: the first is surfer-talk for the time of day when ocean winds cease and the waves become glassy smooth; the second refers to surfers who seek the morning’s similar prime conditions.

Both wall paintings, particularly Evening Glass Off, communicate landscape and open space rather than a compressed, intimate object, and they serve as the perfect foil to the smaller works.

Aaron Parazette’s Snow White Tan is a remarkable exhibition and the artist’s flawless execution and craftsmanship reinforces the shaped paintings as objects unto themselves. For this viewer, the significance of the show’s title, Snow White Tan, a reference to a line from David Bowie’s 1972 Ziggy Stardust, “well hung and snow white tan” is loaded with more irony than the artist probably intended. Snow White Tan, as an installation, is very well-hung.

Most importantly, though, in bringing vibrant color and mesmerizing composition together with variously shaped supports, Parazette has wholly avoided the usual awkward, show-off-y kitsch and has brilliantly succeeded in giving us something refreshing and vibrant: a completely relevant, necessary painting.