Iles & Rizzoli & Isles or: How I Learned to Stop Worrying and Love TV

I am a lazy person. I get lazier. But I decided, a while back, that I would bravely go where many have gone before (Dallas) to see what many have seen (The LucTuymans exhibition at the DMA).

This is a big deal. Thanks to the internet, I rarely leave the house. I read in a recent Scientific American that appearing at public functions and acting as if you’re genuinely pleased to be looking at people is thought to promote the growth of cancer cells. The author went on to speculate that the popular double-cheek-kiss greeting might someday require immediate chemotherapy.

But what with everything we touch containing BPA’s, it could be remotely possible.

Whatever. Absurd fantasies like these, shared with virtual friends while online shopping deter me from leaving the compound.

However, for the Tuymans exhibition, I steelily resolved to make the trek. If I’d hopped in the truck the moment I made my decision, things might have been okay. But I wound up with two weeks to think about the significance of this venture, and God knows that, for a person like myself, any time allowed for speculation is simply a petri dish for breeding obsessive, fantastic, and paranoiac ideas.

I was violently resenting the fact that seeing a bunch of paintings in person would require at least 10 hours of driving in a truck smelling of wet dog. That I’d have to board aforementioned dog. That I’d have to stay in a gross Super8 off the freeway and breathe eternally recycled conditioned air and lie quivering under my poly-spread in fear of unhinged lunatics (thank you, Charles Albright, Texas Eyeball serial killer).

unlike Bundy, this guy didn’t even have the courtesy to look good

This made me question if I really wanted to go, and the answer, despite fear of death and escalating gas prices, was still a resounding ‘yes’.

Because I’ve actually seen this artist’s paintings in person, and like the paintings of Giorgio Morandi, I know that only seeing them up close and personal will make the viewing experience here satisfying. And that, at least for me, is in this case worth it. 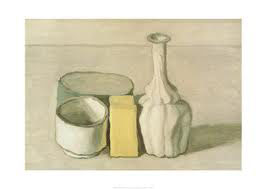 But what if I hadn’t ever seen a Luc Tuymans painting in the proverbial flesh? What if I’d only seen images in magazines or on the internet? Worse, what if I’d only been told by a reviewer that I should see the work?

Would I go to all this trouble?

But with art, particularly the one-of-a-kind stuff,I’ve gotten to the point where I either know from firsthand experience that I need to see it, or I take a recommendation from a friend.

We all know how that goes, though. Even close friends have wildly divergent tastes, let alone agendas, and they can’t always be trusted.

Knowing that even my closest real-not-Facebook pals don’t have my best viewing interests at heart, I wearily eyed my ever-growing tower of untouched phone books—oops, I mean door stops, oops, I mean Ad-Forums—oops,I mean Artforums. 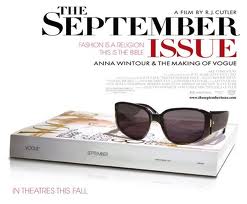 Let’s ask Anna Whose is Bigger.

There they were, each as thick as the Septemberissue of Vogue (Hot dog!This year will be the fattest yet!) and comparably choked with glossy advertisements. The Art-World Bible. The Authority. Every page filled with a full-page advertisement, a Top 10-touting hipster, or a lauded scholar telling me there’s a world of really cool stuff out there in New York and London andBerlin, and I’ll never get to see it. So there.

And I’d just have to take their word that it’s the shit. There’s a rich, glossy full-page ad for JulianSchnabel’s latest paintings—that must mean they’re really good!

For this single reason—that I’ll never be cool—I have found solace, comfort, and even authority in reproducible visual media, namely movies and TV. With these, I can read a review, experience the subject with little to no effort or expense, and walk away proudly, saying, “Why, to hell with you, David Denby! I thought the attention to moral and ethical philosophical subject matter embodied by Matt Damon in the penultimate scene was deep and insightful!” 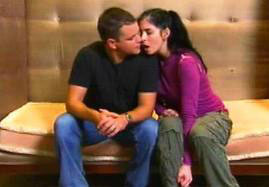 There’s absolutely no reason why I’ve included pictures of Matt Damon. Except for the fact that I really like Matt Damon.

I’ve participated. I’ve got power. And with the exception of that annoying bitch in front of me with the cell phone, I’ve experienced the work just as the artist intended.

Of course, I’m not likening fine art to a Law and Order rerun or Inception. I’m just talking about how possible, in its own meager way, it is to really experience something in these formats. To really know something.

And I want to know something.

By the way, I used to lump internet art in with my category of human-friendly media until I remembered that most internet projects are often subterranean in nature, and that video, for the most part,is, like any painting, on view for a short time in a specific place and is not generally available to the public.

I also, and with great ire, eliminated video from this category thanks to another Artforum incident.Each year, Artforum surveys the “best”of the previous year, according to its handpicked experts. By December of last year, this issue was the only one I bothered to read, and for only one reason:it reviewed the year in film.

As usual, the filthy, populist prince John Waters warmed the cockles of my heart. After reading his picks, I scuttled off to my computer, and with the exception of one or two obscure selections, I was able to find all of them on Netflix.

Then I saw ChrissieIles as one of the selected film-pickers. I was excited. I’ve seen a few of her curatorial efforts and found them thought-provoking. I hungrily scanned her contribution.

Nearly all of her recommendations were art world videos or short films that had been shown in gallery exhibitions and were no longer running.

After a long period of being flabbergasted, I was simplypissed. Why, I thought, was this bitch fucking with my head? Why had she taken the only thing I had and put it out of my reach?

Not knowing if Iles was still a curator at the Whitney, I seriously thought about emulatingKramer stunt in a Seinfeld episode and hurling a stack of Artforums into the museum lobby. 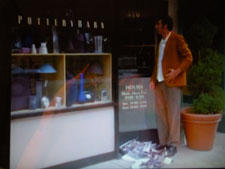 Tired of those jackbooted thugs.

And yes, I realize that I should probably seek help for my deeply disturbing issues with Artforum. Pun intended…

It took me a while—tens of thousands of Seinfeld, Law and Order, and Simpsons and ArrestedDevelopment reruns (not to mention The Godfather,Part II, SerialMom, NoCountry For Old Men, Caddyshack,Out of the Past, The Big Lebowski, Waiting for Guffman,and Zoolander) on infinite loop to get back to my safe place. The place where I know what and whyI like stuff all on my very own and I am not infantilized by some egghead telling me all about the good stuff that I’ll never experience. 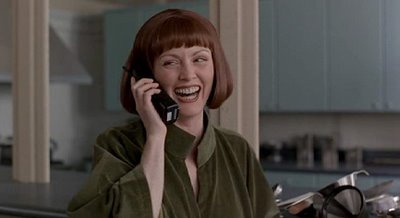 The bulk of art criticism: like describing key lime pie to a starving Ethiopian.

Like I said, though, I’m back. I’ve shut it all out, and I’m feeling strong again. And it’s because of movies and all of that brain-draining TV. My favorite thing to do while watching TV, by the way, is to use the Bechdel Test (1.It has to have at least 2 women in it, 2. Who talk to each other, 3. About something besides a man). 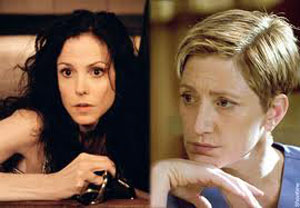 Popular with the gender studies crowd, not so much with the DEA.

I don’t have premium cable, so some of the shows that pass the test with flying colors (Showtime’s Weeds or Nurse Jackie)are unavailable to me. I do have basic cable, though, and since my general obsession is with formulaic crime/action drama, I look at the spate of seemingly female friendly fodder offered on, for the most part, the USA network and TNT.

The only one that really, technically passes the test is the recently released Rizzoli and Isles.A tough driving detective (AngieHarmon) and a frosty medical examiner with a penchant for expensive footwear (Sasha Alexander). It does have everything it should. The relationship between the two women is fairly well written, and the male characters, while not central, are not emasculated or belittled. Unfortunately, the fabulous Lorraine Bracco is reduced to a role of ditzy mother hen-dom, but on the whole, the human element,at least for something like this, is fairly well balanced and pretty feminist friendly.

Of course, the plots are always stupid as hell, and for those of us who thrive on make-believe gore, it’s a disappointment, but that’s beside the point. What’s really irritating about the show is that,despite the strong “feminist” characterizations, is that I’m still watching a couple of smokin’ hotties, and even though they’re smart and successful, Jane Rizzoli andMaura Isles are still only as good as the vision a hopeful male viewer will conjure of the two of them getting into a pillow fight, kissing, and winding up in the shower together. 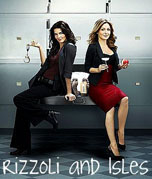 Would any man have ever fantasized such a thing while viewing the groundbreaking (for its time) Cagney and Lacy? I shudder to think. 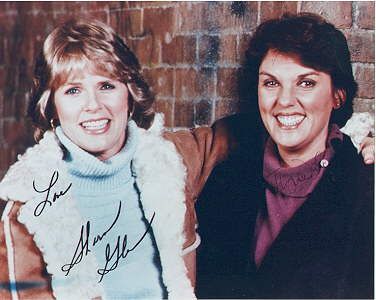 I also shudder to think that this is how far feminist ideals have come in the past 35 years.

But look athow I digress! I’ve contemplated the futility of first generation feminism, allby myself, and all in front of my TV with a blown out picture tube.

I’m too out of the loop to argue with ChrissieIles, but not with Rizzoli and Isles.

I’ll take my empowerment and authority where I canget it.

Oh, by the way, like I said? I’m headed for theDallas/Fort Worth area soon, and I’ll be reviewing one of the shows there (notthe Luc Tuymans).

If you don’t have a chance to see the show I reviewbecause you don’t live in the area and can’t travel there, I fully expect youreaders, all three of you, to take every single word I write as Gospel.

And Mom, that includes you.

This and That: Lynda Benglis & Rosie the...