“Luc Tuymans” at the DMA 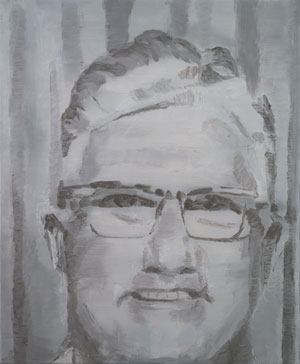 In Luc Tuymans’ 1997 painting Der Architekt, a man wearing skis has fallen in the snow. Almost monochromatic, the image is rendered in frosty blues that lean to black. The figure’s skis and poles are strong linear elements, as is the sloping snow line of the horizon. It’s a simply executed but powerful image. His head turned to the camera, the man’s face is seemingly whited-out by the glare of the snow. There is something remote and slightly unsettling about the painting. It becomes, however, incredibly unsettling when you learn that the image is from a home movie of Albert Speer, Hitler’s chief architect and concentration camp designer. A man who participated in unimaginable horror, captured falling on his ass on a jolly skiing holiday.

Like many Europeans of his generation, the Belgian painter Luc Tuymans grew up in an environment where politics mattered deeply and reflected cultural divides. His mother was Dutch; her family fought in the resistance and hid Jews. His father was Flemish; his family had strong German cultural ties and sided with the Reich during the war. World War II played out again and again at family mealtimes when Tuymans was growing up. At the Dallas Museum of Art press preview for his first U.S. retrospective, the artist quipped, “I learned to eat quickly and not enjoy my food.”

Despite his politically charged upbringing, Tuymans, a painter of formidable skill, didn’t grow up to be a polemicist—at least not in his art. Well-versed in history, he holds strong opinions, but his art does not promote an agenda, unlike much political work. His imagery is informed by an extreme political consciousness and humanism, but he paints in a way that is ambiguous, allowing for a variety of interpretations. 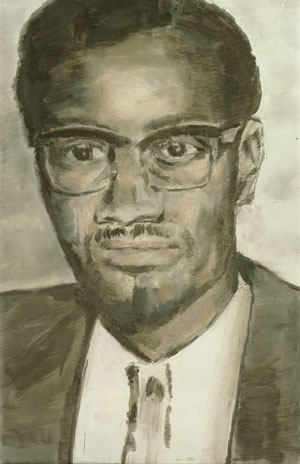 It is this ambiguity, the everyday and banal aspects of evil (Third Reich and otherwise) that fuels a much of Tuymans’ work. In The Heritage VI (1996) a brushy, grisaille portrait of Klansman Joseph Milteer, a guy some believe helped plan the Kennedy assassination, looks like a smiling Rotarian. Meanwhile, Tuymans’ striking series on the Belgian Congo, Mwana Kitoko: Beautiful White Man, includes a full-length painting of the young Belgian king, Baudouin I, great grand nephew of King Leopold II (whose brutal, hand-chopping rule of the Congo led to an estimated 10 million deaths). The image of Baudouin was culled from a 1955 propaganda film in which the twenty-something ruler steps off a jet into his Congolese colony, resplendent in a pristine white uniform complete with gloves and a walking stick. In Tuymans’ hands, he’s a slender and insubstantial figure faded by the sunlight, his eyes obscured by the same sort of dark glasses the artist painted on an image of SS Deputy Chief Reinhard Heydrich.

The series also includes Sculpture, (2000) a strange rendering of a glassy-eyed, loincloth-wearing “native” mannequin figure, the hokey racist kind from natural history museums of yore. There is a gorgeous painting of a leopard skin laid out like a rug, with feet of the man who just walked over it cropped off above. (The Congo’s Belgian rulers seized on the leopard skin as a symbol of their African rule.) The least ambiguous image is an atypically warm (for Tuymans) portrait. It’s of Patrice Lumumba, the first democratically elected leader of the post-colonial Congo. Lumumba spoke out against Belgian atrocities in front of Baudouin, who had praised the “genius” of Leopold II. Lumumba was assassinated in 1961, and the Belgian government and the CIA were implicated. Tuymans selected these images and put them out there for viewers to draw their own conclusions. And they did: when the artist showed the series in his country’s pavilion at the 2001 Venice Biennale, public response (spurred on by a popular book and movie on the subject) helped bring about a public apology from the Belgian government.

Tuymans’ work is successful because he’s a deft and compelling painter, but once you know the stories behind the work, they obviously shape the way you view the paintings. Like Gerhard Richter (Tuymans’ elder) and Marlene Dumas (Tuymans’ contemporary), the artist most often works from found images. Finding the right one is key to his work and he exhaustively researches his subjects. The five years Tuymans spent as a filmmaker gave him an objective, cinematic approach to images. Once he has honed in on one, Tuymans executes almost all of his paintings in a day. 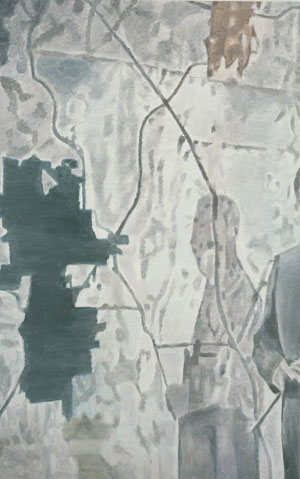 Because he works quickly, wet on wet in oil, you can see the hand of the artist in the pigment and almost feel the paint sliding around on the canvas. And the color palette of that paint is very European; Tuymans doesn’t deal in the bright, clean, pop colors of America. In series exploring things like disease and the Holocaust, the dominating hues are those one associates with European institutional spaces. One such example is Our New Quarters (1986), based on a postcard the Nazis produced of the Theresienstadtconcentration camp. In it, a camp building is rendered in simple black strokes against a grim grey-green background. But even when Tuymans makes a (surprisingly engaging) painting of gift wrap, the paper is a beige, the supposedly gay stripes a dull red. (That the wrapping paper was of East German make explains much.)

The use of aged colors do something to impart the burden of history that seems to weigh on Tuymans. When WWII ended, a lot of people who did horrific things just went about their lives, unpunished. People made rich by confiscated Jewish property lived on as bourgeoisie. Doctors who experimented on prisoners continued their practice and research. And people who were persecuted and survived never received justice. Tuymans painted Die Wiedergutmachung (Reparations) (1989) after watching a documentary about the persecution of ethnic groups like the Roma and Sinti—the people that, according the exhibition catalog, the Nazis described as a “Gypsy plague”

In this painting, a grid of black lines contains irregular circles of faded blues, greens and browns, with black dots in their centers. It’s a small, self-contained, seemingly abstract work, but like Tuymans’ striped (gift wrap) painting, you know it references something, you just aren’t quite sure what. The painting is based on Nazi photographs of eyeballs. The notorious doctor Josef Mengele and his ilk experimented on the eyes of gypsy children, injecting dye and attempting to change their colors and killing children with heterochromatic eye color to excise their eyes. They recorded their work in color photographs. For years Gypsy survivors were deemed ineligible for financial reparations because it was said they were imprisoned because of “asocial” behavior rather than race. Tuymans’ painting is a mute visual testament to the atrocity. 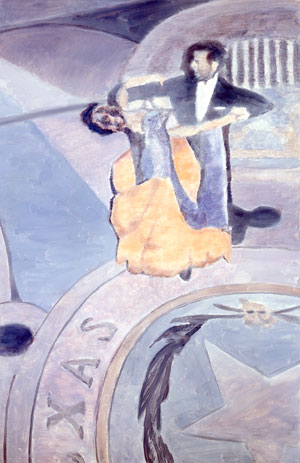 The artist turns his focus to the new world in the 2008 painting W. It isn’t an image of whom you might think. The painting depicts a washed out, hazy map projected on the wall, its markings creating an abstract pattern. A sliver of a man in a grey suit is shown, his shadow crossing the map. It could be a film still of a James Bond villain plotting world domination but painting was actually done from a photograph of Walt Disney. He was presenting his grand, plan for a showcase Disney community where the residents would have no property or voting rights and would live under a kind of “benevolent” corporate dictatorship. The project was never realized.

And speaking of W, Tuymans’ 2005 painting Ballroom Dancing, depicts a tuxedoed man and a woman in a flamboyant yellow-skirted dress waltzing across the seals of the United States and the State of Texas. It’s an omniscient overhead view of a formal, stilted ritual that simultaneously implies a trivial superficiality. Instead of fiddling while Rome burns, they’re dancing while the world blows up.

But we all bring our own political baggage to Tuymans’ work. A Republican art collector could buy that same painting and conceivably pass it off as a Bush inauguration tribute. Tuymans grew up in Antwerp, a city that has seen a disturbing rise of nationalist, anti-immigrant sentiment. He knows the danger of fascist tactics and he doesn’t use them in his art. He’s not going to create paintings that tell you what to think.

Kelly Klaasmeyer is the editor of Glasstire.