I have a recurring dream that I discover a hidden room, floor or entire wing in my existing home. The expansive imaginary space defies Newtonian Physics, and the ornate architectural styles vary as wildly as Hearst Castle’s. Ambling through these cavernous rooms in my sleep leaves me craving for secret passageways in my waking life, which is why the fabled “Celestial Suites” at Crowne Plaza Hotel near Reliant Center have become my own Holy Grail. 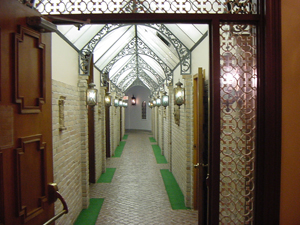 A few weeks ago I left a message for the manager of Crowne Plaza inquiring about their penthouse suites, and secretly hoping to arrange a private tour. No one called me back.

The Crowne Plaza Hotel (formerly known as Astroworld Hotel) was built in 1969 by the late, great Judge Roy Hofheinz, mastermind behind the Astrodome. The entire top floor of the original hotel encompassed the Judge’s own apartment, known as “The Celestial Suites.” For reasons that defy bottom-line logic, the hotel chains that succeeded the Astroworld Hotel have kept the penthouse intact. This act is highly commendable (go Crowne Plaza!) given Houston’s wrecker-ball history.

Judge Hofheinz and his wife, Mary Frances spent over one million dollars creating the most expensive suite in the world to house all of their many treasures collected over the years. Harper Goff, art director for Disney’s Academy Award winning, live-action film, 20,000 Leagues Under the Sea, designed the Judge’s million dollar suite. In 1978 the Guinness Book of World Records listed the Celestial Suite as being the most expensive suite in the world (from the Crown Plaza website). 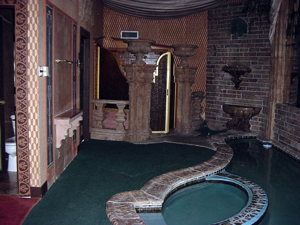 Like the box seats at the Astrodome, each room in The Celestial Suites was named and furnished in a different theme. The entrance to the suites was known as The Foyer of Fountains, named for Ponce de Leon and the Fountain of Youth. Suites included The Acapulco Patio, P.T. Barnum Room, The Fu Manchu Room, The Adventurer Suite, and The Roman Bath, to name a few. 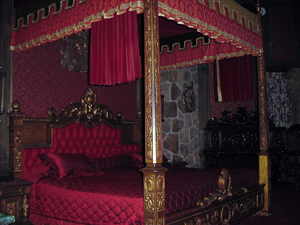 In Geoff Winningham’s 1975 documentary, The Pleasures of This Stately Dome, Winningham asks Hofheinz if he agrees with people who think the Astroworld Hotel suites are gaudy and ostentatious. The Judge pauses for an uncomfortable amount of time due to the after affects of a stoke, and finally breaths, “They’re memorable.” I couldn’t agree more.

Astroworld Hotel was just one of the Judge’s big ideas, but by far the biggest was the Astrodome itself–the single structure that put Houston on the map, as a city of the future where no feat was too large to accomplish. For decades, it was the largest stage in the world.

Dubbed impossible to build, and described as a geometric nightmare by steel workers, the Astrodome was completed on schedule, with all 53 skyboxes sold before the grand opening. It was the most lush and pampered stadium in the world (one reporter wrote, ”Upholstered seats for sports fans? Are they crazy?”).

Hofheinz, who became a lawyer at 19, a state legislator at 22, a county judge at 24, and Mayor of Houston for two terms, reportedly was inspired to build the dome after a visit to the Circus Maximus. When the Astrodme opened in 1965, it contained five restaurants, a bowling alley, a movie theater, a barber shop, a medieval-style chapel, a Presidential suite, 60,000 plush seats, and exclusive clubs and skyboxes with unique decorative themes like Tahitian Holiday, Southern Plantation, Spanish Provano, and Captain’s Cabin. It even had it’s own weather station on the roof.

The Dome reigned supreme on many fronts:

Even the staff at the dome wore futuristic uniforms. The men who vacuumed the Astroturf were called Earthmen and looked more like spacemen, and the women who greeted guests wore gold suits with domed-caps, and were called Spacettes.

Elvis performed there, Ali boxed there, Billy Jean King beat Bobby Riggs in “The Battle of the Sexes,” there, Evel Knievel jumped 15 cars with his motorcycle there, Billy Graham preached there, the Guru Maharaji sold “knowledge: there, and so on.

According to architectural historian Stephen Fox, ”the Astrodome is one of the great monuments of American hubris in the 1960’s in this sense of no limits.” What’s more is that the dome contributed to the desegregation of public facilities in Houston. A 1999 NY Times article titled “Last Innings at the Can Do Cathedral,” states “When a second bond referendum to build the dome was facing major opposition, the judge lobbied the city’s growing, if largely disenfranchised, block of black voters, promising that blacks could attend all events at the Dome and also could work there.”

They say a child who has many nicknames is well loved, and the Astrodome had many:

“Eighth Wonder of the World,”
“Can Do Cathedral,”
“Taj Mahal of Sports.”

In 2000, a mere 35 years after its spectacular unveiling, the Astrodome had become a relic. In 2001 on the same complex, Reliant Stadium was built—Houston’s first retractable roof football stadium, with about 20,000 more seats than the Astrodome. Today, the Astrodome is vacant and its fate is unknown, though there’s a proposal to convert it into a movie studio. I ask, What Would Judge Roy Hofheinz do?

Iâ€™m enchanted to visit this site after stretched time which was because of my cheap vps project. I have noticed here insertion of web site design editorials. This is an excellent amendment which will leave good blow on userâ€™s who are voracious for these topics. I was in quest of domain registration and internet service providers info for several days and lastly I got it at my preferred website.

A few years back, I was treated to a complete guided tour of the suites and the “secret” passages that unite them. Fascinating that anyone would actually do what the originator and his cohorts were rumored to have done. A veteran hotelier, I have stayed in many interesting guest quarters. None as bizarre as the Judge’s chambers.

Andrea — I have a trove of digital images I took in 2005-2006 (can’t remember) from an impromptu tour of the Celestial Suite. Let me know if you still want to ‘see.’ Incroyable! -katy

I am putting together a news story on the celestial suites at the old Astroworld Hotel. Would love to see the photos. I was only there one time and didn’t have a good camera with me at that point..

You might also be interested in checking out the Feather Nest Inn feathernestinn.com/
Themed fantasy hotel in NJ. I shot a series of videos there covertly a few years ago. Also on my must see list is the ice hotel in sweden
http://www.icehotel.com/

Would love to see more pictures of this beautiful set off suites! I toured there during a tradeshow years ago and have never forgotten it! I want to share that experience with those who STILL don’t believe me! Thanks.