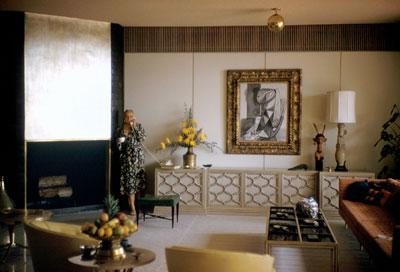 Tom Slick Jr. at home...Photograph by Roy Stevens for a 1960 Fortune Magazine article

Though a plane crash ended his life prematurely at age 46, San Antonio businessman and philanthropist Tom Slick Jr. had enough adventures for several lifetimes. He founded the Southwest Foundation for Biomedical Research, the Southwest Research Institute and the Mind Science Foundation, but he also found time to travel the world and lead expeditions in search of the Loch Ness Monster and the Abominable Snowman.  Heir to an oil fortune – his father, Tom Slick Sr., was known as the "King of the Wildcatters" – Slick had the resources to pursue whatever struck his fancy, from developing the Brangus cattle breed to campaigning for world peace. 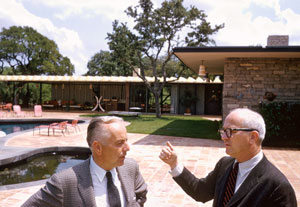 In the late 1950s, he worked with famed San Antonio architect O’Neil Ford on the design of an ultra-contemporary house that was constructed using the Youtz-Slick Lift-Slab method, a quick and inexpensive way to erect low-rise slab buildings that Slick helped develop. (Ford also used it in the construction of the Trinity University campus in San Antonio.) Slick spent the last few years of his life filling the house with some of the best art of his time, including works by Barbara Hepworth, Ben Nicholson, Isamu Noguchi, Georgia O’Keeffe and Pablo Picasso.

The collection has been dispersed among his family since his death in 1962, but the McNay Art Museum has pulled together the most important pieces for Tom Slick: International Art Collector on view through September 13. During his lifetime, Slick loaned works from his collection to the McNay, the Witte Museum, the Laguna Gloria Art Museum in Austin and New York’s Museum of Modern Art.

In 1973, the Slick family donated several key pieces to the McNay that have become landmarks of the museum’s permanent collection. Among these works is Georgia O’Keeffe‘s From the Plains I (1953), a reworking of smaller but similar compositions she did around 1919 while living in the Texas Panhandle. With a blazing sunset and streaks of red and yellow flashing across the sky, the large-scale painting reflects the influence of the Abstract Expressionists. This brightly-colored O’Keeffe has been reunited with more somber works owned by the family: The Black Place III (1945), an abstract study in gray tones of a sensuous valley; Goat’s Head (1957), a bleached white skull against a brown and tan sand dune background; and the pale blue and green Sun Water Maine (1922).

Picasso’s Portrait of Sylvette (1954) is the show’s signature painting, a cubist composition in tones of gray and white; a profile of a woman with a ponytail. Slick was looking for a Georges Braque that would be a companion to this painting, but the plane crash cut short his quest. He also collected several examples of Picasso’s ceramics, including a tray featuring a goat’s head, a large jar with birds and fish, a vase with the face of an owl and a pitcher in the form of a topless woman. 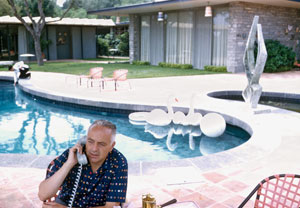 Women were a favorite subject for Slick, who was twice divorced and spent his later single years pursuing women all over the world. While much of his collection is abstract, perhaps reflecting his interest in the "unseen world" of the occult, there are some notable female images, including Raoul Dufy‘s Nude in Drapery (1930), Eugenie Baizerman‘s Crouching Bather (1943), an early abstract study (c. 1958) of a nude woman asleep in bed by Larry Rivers and a bronze torso by William Zorach of Victory (1950).

Perhaps the most unusual work in the show is Louis le Brocquy‘s Emerging Figure (1958), a ghostly white-on-white painting that contrasts a woman’s shapely hips and abdomen with an exposed shoulder bone and spinal column rendered as smears of gray. Le Brocquy, who was inspired by his wife’s spinal surgery, is an example of an artist who was acclaimed during Slick’s lifetime, but who isn’t much regarded today.

Though he often looked for works of art during his travels, Slick had special relationships with the dealers Edith Halpert in New York and Charles and Peter Gimpel in London. Halpert’s Downtown Gallery championed American art, while the Gimpels led the way in contemporary British art of the 1950s. Works by British artists include a series of playful, animated abstracts by Alan Davie and abstract landscapes of Cornwall, countryside the artist Peter Lanyon observed while hang gliding. Nicholson’s Jan 3-52 (Cromlech) (1952) is a large-scale, abstract Cornwall landscape in washed-out shades of tan, light orange, pale blue and white

Slick collected a few artists in depth, most notably Hepworth, who is represented by several sculptures in both bronze and marble. Reclining Figure (Landscape Rosewall) (1957) is a horizontal, roughly textured, greenish bronze piece that refers to the hilly landscape of Cornwall. Head-Icon (1959) is made of polished white marble with a hole through the curving form. Winged Figure II (1957) is a curving vertical bronze with plaster and wire fanning out to suggest a musical instrument. Cantate Domino (1958) is one of an edition of six bronzes and suggests praying hands, which Hepworth said she wanted as her headstone. 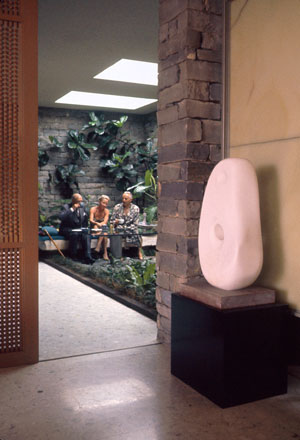 Three paintings by artists from India were acquired by Slick from the Kumar Gallery in New Delhi, which is still a leader in contemporary Indian art.  M.F. Husain combines Hindu deities with Abstract Expressionism in Devil II (1961). N.S. Bendre was part of a movement in the late 1920s and early 1930s that opposed the academic style imposed by British-established schools in the late 19th century, reflected in his finely rendered circles of lapis lazuli, derived from Indian miniatures, against an amorphous background reminiscent of algae growing in a Petri dish. Om Prakash painted the mountains of Himalaya in a style informed by German Expressionism.

Truly stunning are the space and light paintings by the Polish artist Wojciech Fangor, who is often linked to Op Art, although he painted in soft-edged oils rather than the more hard-edged acrylics of artists such as Kenneth Noland. Fangor’s overlapping dark and light blue circles in #29 have a mesmerizing, pulsating effect. The Square series resemble airbrush paintings, but are meticulously done with oil on canvas. These paintings are an expression of Fangor’s theory of "Positive Illusory Space," the area in front of the canvas where the viewer becomes totally absorbed in experiencing the painting.

Other outstanding works in Slick’s collection include Isamu Noguchi‘s The Mirror and Sentry, three tall gold-painted columns of aluminum with inset rectangles; stylized heads of a horse and saint by Texas artist Charles Umlauf; and the organic forms against a stained pink background in William Baziotes‘ Whirlwind.

Unlike Marion Koogler McNay, who collected with the intention of founding a museum, Slick was primarily concerned with buying works that fit his cool, clean-lined, Ford-designed bachelor pad. Slick’s collection wouldn’t look out of place decorating the early 1960s advertising offices of "Mad Men." Whirlwind was one of his most prized paintings and had a "place of honor" in his blue-and-green dining room, while Portrait of Sylvette can be seen hanging near his fireplace in a photograph with Slick, wearing a bathrobe and holding a cup of coffee, talking on the telephone. This was a collection that Slick assembled to live with, reflecting his wide-ranging interests in various types of creativity and the uncharted territory of the mind.


"Lonely Are the Brave" at Blue Star

[…] “In the late 1950s, [Tom Slick] worked with famed San Antonio architect O’Neil Ford on the design of an ultra-contemporary house that was constructed using the Youtz-Slick Lift-Slab method, a quick and inexpensive way to erect low-rise slab buildings Slick helped develop, which Ford also used in the construction of the Trinity University campus. Slick spent the last few years of his life filling the house with some of the best art of his time, including works by Barbara Hepworth, Ben Nicholson, Isamu Noguchi, Georgia O’Keeffe and Pablo Picasso,” wrote Dan R. Goddard for Glasstire. […]

I worked as O’Neil Ford’s office manager for four years when he was on King William. I remember him talking about Tom Slick’s residence and in the late 1950’s his pool house cost $40,000 a ton of money back then. All the exterior rock was brought in from out of the country, the concrete columns inside the house were covered in gold leaf, had black leather floors in master bedroom. Neal loved that house and many others he designed in the same area in San Antonio.