Stepping into the gaping jaws of a jaguar, you walk downstairs into a magical grotto with dripping stalactites and a splashing waterfall. This $3 million fairytale creation by San Antonio artist Carlos Cortés is a highlight of San Antonio River Walk’s new two-mile Museum Reach expansion that stretches north from downtown past the San Antonio Museum of Art (SAMA). The spectacular cave-like grotto is a folk art fantasia that would dazzle Walt Disney. But instead of stone, the walls are made of concrete sculpted to resemble rock and cave formations. El Trabajo Rustico, or the rustic work (which is what it’s called in Mexico), has been a Cortés family tradition for generations.

Cortés learned how to hand carve concrete into drippy, dreamlike forms from his uncle, Dionisio Rodriguez, who built a bus stop resembling a palapa, or thatched-roof hut, in Alamo Heights in the 1920s. Cortés, who built the H-E-B Science Treehouse at the Witte Museum and an outdoor pavilion of twisting oak tree trunks holding up palm fronds at the Hannah Landa Memorial Library, also built a palapa at the intersection of Camden and Newell streets overlooking the grotto, his grandest folly. This once forlorn and forgotten corner of the city has been transformed as part of the $250 million public/private San Antonio River Improvements Project, creating a 15-mile linear park through the heart of the city from the headwaters at Brackenridge Park south of downtown to Mission Espada.

Cortés said he studied the old grottos of Europe and Latin America as well as cave formations before embarking on his biggest project to date. He carved the craggy face of Father Nature into a wall of the grotto, and he plans to add castings of the faces of the men who worked with him on the project. Shellwork mosaics are embeded in the outside of the grotto along the river, and there are other “follies” to be found tucked into the grotto’s recesses. Benches, indirect lighting and the waterfall make the grotto a cool place to retreat from the South Texas heat. However, the top of the grotto has been compared to “poo” by some critics. Modeled to resemble a natural rock formation, it contains the silhouette of the Virgin Mary formed within the carved concrete form that sticks up above street level like a gnarly steeple.

The San Antonio River Foundation commissioned the grotto, along with another $2.2 million worth of public art projects, for the newly opened Museum Reach, which connects the better-known central tourist zone of the River Walk with SAMA and the revitalized Pearl Brewery, extending from Lexington Avenue to Josephine Street. San Antonio has had its share of public art controversies, but the city is now touting tours of its new “floating art corridor.”

Lushly landscaped walkways run along both sides of a part of the river that has long been practically invisible because it was so neglected and overgrown. A functioning lock, already a tourist attraction, makes it possible for barges to carry sightseeing passengers around the new loop. Both boat riders and pedestrians can enjoy public art projects by eight national and regional artists spread over a series of eight bridges and six underpasses. The main complaint about the new art along the Museum Reach is that it’s an all-male show. 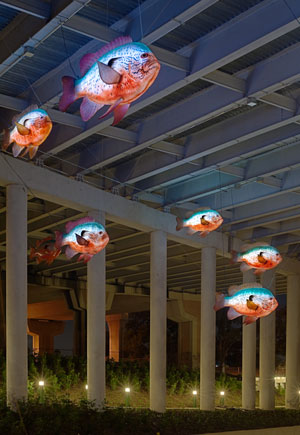 Just south of the grotto, Philadelphia artist Donald Lipski has suspended a school of 25 glowing longear sunfish, entitled F.I.S.H., beneath an underpass at Interstate 35. The swooshing sounds of the traffic, like giant waves crashing on a beach, lend to the underwater feel of the installation—a surreal sight for anyone driving by. At night, the internally-lit 7-foot long fish seem to be swimming through dark depths, but during the day, the cables and lines that Lipski used to hang the fish are more visible, undermining the illusion somewhat. Still, it’s probably the most surreal and amusing highway underpass you’re ever likely to visit.

Lipski created a giant Texas star covered with cowboy hats for the Fort Worth Convention Center, and he’s proposed a fountain of overflowing bathtubs for a Houston waterworks museum. Made of meticulously hand-painted fiberglass so each is an individual, the sunfish are modeled after fish native to the river, featuring bright bands of color accented by a black ear-like fin along the sides of their heads. Lipski’s fish may be seen as the downtown counterpart to one of the city’s best known works of public art, Bob Wade’s giant cowboy boots near North Star Mall. Both aim to please the public with humor on a Texas-sized scale.

But it’s not just the giant fish that are attracting crowds. A large colony of bats living under the same bridge as the fish became fodder for local news shows when the Museum Reach first opened, and now the bats’ nightly takeoff attracts hordes of nature lovers. 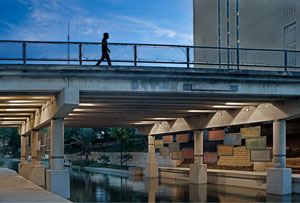 
Bird calls, frog croaks, crickets and other natural sounds make it seem as if a zoo has been installed under the Jones Avenue Bridge beside SAMA, but it’s just the natural sounds of the river amplified and intensified by sound artist Bill Fontana of San Francisco. He used microphones at different locations along the river to capture rushing water and a wide variety of bird calls and buzzing insects. These sounds are broadcast over outdoor speakers suspended under the bridge. The sound is rich and atmospheric, though there’s no visual component to Fontana’s work—the view consists of a series of large drain pipes that empty out under the bridge. However, the concentrated waves of the sounds of nature make the river seem far more exotic and lush than it actually is in the middle of the city. The installation is Fontana’s first in Texas.

San Antonio artist Stuart Allen relies on the viewer’s movement—either walking or riding in a barge. His series of metal panels with shimmering, thin metal strips featuring colors sampled from the sky, water, plants and landscape cause flickering, optical experiences as you move past. Allen’s work focuses on a subtle exploration of our senses, although he is trained as an architect, which is reflected in the solid design of his installation that looks like it should last for decades. Allen’s work doesn’t do much if you’re standing still, but as you move past the colors morph and merge in unexpected ways. 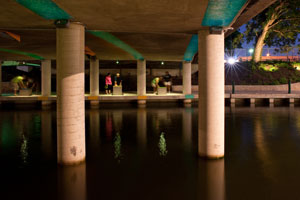 Mark Schlesinger's Under the Over Bridge...photo by Mark Menjivar

Experimenting with cement infused with fluorescent pigment, Mark Schlesinger, a New York artist who has settled in San Antonio, used the old concrete bridge at Ninth Street as his canvas, adding stripes and oddly tilted reflective panels. But the glow-in-the-dark concrete is already scuffed in places, and it doesn’t really glow all that much. A couple of large cubes between the pillars of the bridge are the best part of Schlesigner’s installation. Light shines out through small holes in each cube, which you can manipulate by using your hands as shades. Light seems to travel through the cubes at crooked angles.

For his first US project, British artist Martin Richman, suspended hundreds of prismatic strips beneath the Lexington Street Bridge, which is the entrance to the new Museum Reach from downtown. The light dancing on the water at night can be seen from blocks away, creating a sense of mystery and anticipation. The yellow, purple and blue strips dangle beneath the bridge like wind chimes—Richman dubbed them “light chimes.” They sway in the breeze, forming shifting patterns on the cement walls of the bridge and the surface of the water.

The Museum Reach also features two donated pieces of public art. Near the Lexington Street Bridge, a Works Projects Administration-era tile mural originally commissioned by famed San Antonio Mayor Maury Maverick for his family’s kitchen has been restored at Dunis Studio in Bulverde and installed on a river wall below the El Tropicano Hotel. The Mexican village scene was created by Ethel Wilson Harris, who had a private tile business in the 1930s called Mexican Arts and Crafts.

The River Foundation also installed signs along the Museum Reach with historical information about city, one of which appears by an old dam that was discovered opposite the oldest VFW Hall in the country. Rockport sculptor Jesús Moroles installed three soaring slabs of granite, River Stelae, at the top of the bank on SAMA’s property overlooking the old dam, though the piece is not lit for nighttime viewing (which is really the best time to see the Museum Reach).

Two San Antonio artists have yet to complete their designs for bridge railings. Meeting the city’s requirements for sidewalk safety caused delays, but the bridge railings are expected to be finished by late fall. George Schroeder is making art nouveau handrails incorporating forged-steel sculptures of plants and animals for bridges at Camden and Newell streets, next to the grotto. Rolando Briseño has designed canopies and railings for bridges at McCullough, Brooklyn and Ninth streets.

Briseño already has a work on the River Walk downtown, Padre Damian Massanet’s Table, praying hands and an open book in wrought iron commemorating the 300th anniversary of the first mass said on the bank of the San Antonio River. You can find a few other scattered works of art along the River Walk, ranging from a larger-than-life bronze of the city’s patron saint, Saint Anthony, donated by the government of Portugal in 1950, to the towering, orange abstract Torch of Friendship by the Mexican sculptor Sebastián. But until now, art has always been an afterthought on the River Walk.

San Antonio’s attitude toward public art has improved quite a bit since the cultural wars of the 1990s, when a funding for art ordinance was shot down during a heated City Council campaign. No controversies have erupted over the new art on the river, all privately funded by the San Antonio River Foundation, though the foundation’s selection process came under fire for overlooking female artists. The foundation responded by commissioning San Antonio artist Anne Wallace, who created an outdoor sculptural installation for the city’s popular Brackenridge Park, to work on a footbridge on the Mission Reach, the next phase of the San Antonio River Improvements Project that will stretch through the city’s long-neglected South Side.

The original River Walk was completed in 1940 but it languished underutilized for decades until the success of HemisFair in 1968 made San Antonio a popular tourist destination. But the new Museum Reach is intended more for residents than tourists; except for the VFW Hall and the El Tropicano, there isn’t much in the way of restaurants. Sunk below and shielded from the bustle and noise of the city, the River Walk is a natural spot for art, though these new public art projects are the first to be fully integrated into the River Walk’s design. The art doesn’t have to compete with skyscrapers; instead it’s framed by winding walkways, limestone walls and native Texas plants. But whether the new Museum Reach will bring life to a long overlooked part of the river is a question that may take some time to answer. Thankfully, though, the city seems to have finally decided that art has as much a place in San Antonio as the river that runs through it.