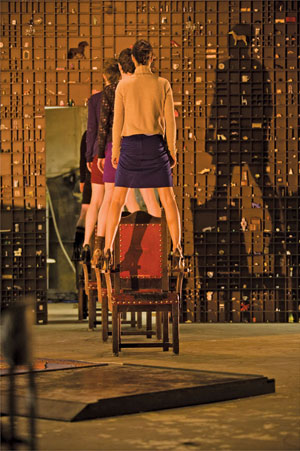 House of Mind, Pat Graney‘s work in multiple media (installation, sculpture, video and choreographed performances), is probably the most ambitious project ever taken on at DiverseWorks. It’s an exhaustive tribute to memory — that of the artist, of her mother and of a lost bit of America — and it’s worth it to get down and see the show before it closes, even if you’re too late to catch one of the staged performances.

Graney’s installation at first occupied both the theater and main spaces of DiverseWorks to accommodate the dance performance; now the entire installation has been moved to the main gallery, which does the piece a great service. Graney’s tactic here is to overwhelm us with sensation, be it aural, tactile, or visual, and it packs a more powerful punch when it’s concentrated.

Each allotted space of the installation seems to represent a family member or stage in the artist’s life in either a specific or more general way. At one point, we are prompted to navigate a narrow corridor, lined with police reports hand typed by the artist’s father. At the end of this alley sits a desk, old-fashioned typewriter and lamp. The clack of keys typing can be heard from below the desk. The close space, papered with numerous reports (all rather tedious), is one of the few truly masculine areas of the installation, signifying, in a fashion, a late ’50s/early ’60s America: hard-working, uniformed, absent male figure.

In what could very well be a completely working kitchen, we feel the undeniable presence of the homemaker. One amazing thing about this installation, not only in specific segments but overall, is the artist’s uncannily accurate attention to detail. The counters, the appliances, the dishes — everything belongs to its specific time period. We know exactly what Pat Graney’s childhood looked like. 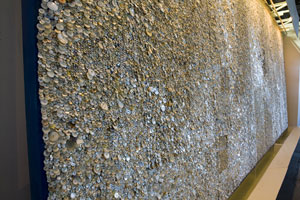 This is further illustrated in a child’s bedroom, complete with retro-styled "wallpaper" and a video image of a child tossing fitfully (surely a reaction to the serpent whose tail emerges from beneath the bed). In yet another section of DiverseWorks’ main space is a giant tchotchke wall or cabinet. Placed within each of the hundreds of divided spaces in the wooden wall are, among other things, a tiny china plate, a kewpie doll and a small box of Wheaties with Mary Lou Retton on the front.

However effective these rooms are at evoking mood, though, none are more potent than the two pieces installed in the front foyer of the gallery. Along one wall is the most remarkable piece in the entire installation. It is a waterfall, constructed from a series of panels to which 100,000 mother of pearl buttons have been affixed. Lit from above, the water cascades into a narrow reservoir. The buttons glimmer, the water is predictably calming and the room is dimly lit. As a piece of folk art, it’s a wonder on its own.

Directly across from this, however, are hundreds and hundreds of books stacked with their spines showing. A video of an old woman, the artist’s mother, is presented as if cut out from the stacks. The footage of Graney’s mother, who was diagnosed with Alzheimer’s after House of Mind had begun production, adds a complexity to this piece that I am not sure it would have had otherwise. Over and over, you hear the mother saying, "How can you have an idea of memory loss when you’re not conscious of losing your memory?" This portion of the installation seems to say that memory of anything — the contents of a book, of childhood, of what you had for breakfast, all of it — is as ephemeral as the water falling over mother of pearl.

The presence of the artist’s mother in this segment highlights a certain tension within the installation and dance performance as a whole. Each section or tableau is supposed to evoke a dimension of the artist’s memory, and each is exquisitely rendered (one of my favorites is the red room with a pile of golden shoes atop white sand). However, many sections recall nothing so much as reproductions of film or theater sets, and without characters to populate them they seem to lack meaning. 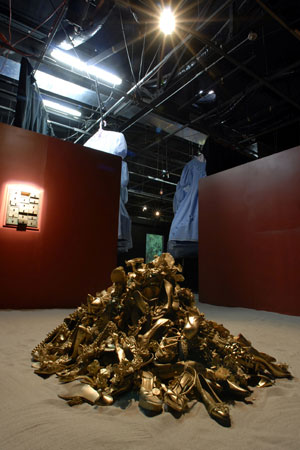 The paper-lined corridor and typewriter desk, for instance, are clouded with references to drudgery and writer’s block from "The Shining" (ALL WORK AND NO PLAY…), "Barton Fink" and "Naked Lunch." Of course, these references belong to Graney’s world, not our own, and they will mean different things to different viewers. But for me, the resemblance to a set is distracting. This effect is not limited to the room-size installations, which are meant to present a full package of verisimilitude. Even the installations with multiples (the golden shoes, huge doll dresses) or miniatures (the living room and dining room table are replicated in dollhouse scale) felt like something out of a David Lynch film. The more the artist loaded a particular segment with detail, the more removed I felt from the poetry and poignancy of her thematic content. The same can be said for the accompanying video pieces. The wind waving through the treetops said far more than the montage of period footage. For me, then, it is the relative abstraction of the concept, as in the foyer, that makes for transcendence.

I did see the performance that accompanied House of Mind, but I don’t feel particularly qualified to comment on it. Many of the movements seemed redolent of child’s play: the awkward manner in which kids drape themselves over the arms of chairs; the sport of trying to fit oneself into a kitchen drawer. And the dreamlike quality of much of the dance — the march of the sexy secretaries — was well-executed. With the exception of a segment in which a woman marches out in impossibly high heels and sprawls about a couch to Jefferson Airplane’s "White Rabbit,"  however, I was a bit numbed with the repetition. And in an effort to seduce all of our senses, Graney’s dancers bake a cake, filling the theater with its aroma. Although the smell did evoke memories and images for me, I felt, as with the sets, that we were being seduced with too much.

In the foyer of DiverseWorks Graney demonstrates that she can bring in a flood of memories with a single brushstroke. And though the rest of the installation can seem a bit overpopulated, the spectacle alone is worth a trip down to the gallery.


"Sterne and Steinberg: Critics Within" at the Menil Collection


"NeoHooDoo: Art for a Forgotten Faith" at the Menil Collection