Martin Puryear at The Modern 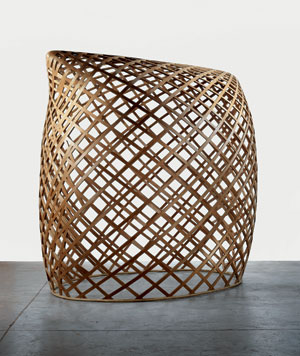 Martin Puryear exhibited a group of his wall-mounted wooden circles at Delahunty Gallery here in Dallas back in 1981. I can’t imagine that anyone among the twenty- to thirty-year-old art crowd knew much, if anything, about him. Delahunty, along with Carol Taylor Gallery, were about the only two venues that “brought in” art from the national scene. I remember that I did not think too highly of the work.

What did I know?

The slender, finely worked circles, whether open or closed, were all about sixty inches in diameter and they struck me as taking up too much wall for the visual effect they generated. I was also put off by the specificity of the materials, with each work noting precise combinations of woods like maple sapling, pear wood and ponderosa pine. Too precious. Too crafty. I wrote them off with the easy disdain that came both with my age and my absolute ignorance at the time of the artist’s growing body of work. 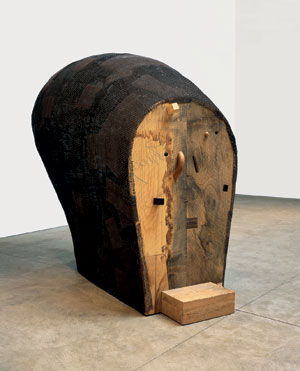 As I saw more of Puryear in galleries and magazines, and those circles ballooned out into forms suggesting baskets, tribal dwellings and ancient monoliths, my interest increased. A 1991 retrospective at the Art Institute of Chicago was an exhibition I wanted to move into. The forms, some of them large enough to inhabit, were seductive and funny by turns. The sculptures bulged and spread across the floor, at times imposing their scale on the viewer and at other times inviting you to stand over them to contemplate their manufacture. That shopping list of materials I found off-putting in the earlier circular works was still on hand, but there was no longer anything fussy about the rattan work or the tar-covered wire mesh or the pegged 1 x 2 boards of basswood and cypress. Puryear was now a master craftsman who knew both how to dazzle and how to make it look easy. He was also not opposed to occasionally making it look absurd. What are we supposed to make of those works that look like chain-link dinosaurs or giant snails? 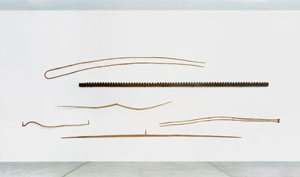 The Martin Puryear Retrospective at the Fort Worth Museum of Modern Art through May 18 is the largest gathering of his work to date. Those circles, which still seem to take up too much space on the wall, are there but are now shown in context with other early linear works like Some Lines for Jim Beckwourth (1978). Twenty-two feet long and incorporating eight cords of twisted rawhide pinned to the wall, the work looks like the ruled lines of a notebook waiting to be filled in. Meanwhile, Some Tales (1975 – 1979) fills up almost 33 feet of wall with a spare arrangement of slender, sometimes spindly, wooden shapes suggesting needles, saw teeth, hair pins and broken toothpicks. Some Tales is genuinely awkward and that works surprisingly well. It is way too oversized and difficult to get a perspective on. In order for the work to coalesce, you have to view all the individual elements as simply parts of the whole. Some Tales reads as an anthology of Puryear’s early investigations. 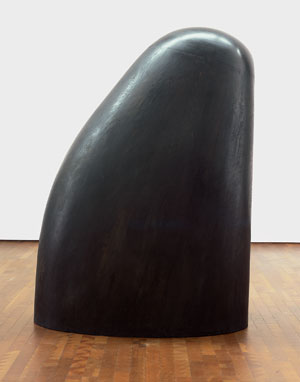 In a way, the exhibition as a whole comes across as an anthology more so than a retrospective. It reads as a compilation of Puryear’s various lines of investigation. Because of his attraction to materials, as well as a wide range of traditional craft techniques, you don’t follow any clear thread of developing interest in Puryear’s exhibition. You are constantly brought up short by shifts in scale, material, solidity and porousness. What does run throughout the work is the feeling of a force pushing the sculptures outwards, creating inner spaces that can at times be seen, either through openings or meshed surfaces, but that are often only sensed. Even those early circles can be seen as creations of an interior force that has expanded them into their final shape.

As Puryear’s work progressed it became more and more about volume rather than line, although line remains an important element. At times the line serves chiefly to define a sharp silhouette. Puryear’s carefully constructed forms may be as smooth as weathered menhirs or as sharply angled as crystalline structures. But as you walk through the galleries in Fort Worth you run up against unexpectedly linear works like Thicket (1990). It’s as chunky as anything in the exhibition, an amalgam of roughly pegged together boards. But as you walk past it, it becomes a ragged line angling away from you. Other sculptures, such as the wickerwork The Charm of Subsistence (1989) have, depending upon your approach, a similar, surprising thinness. 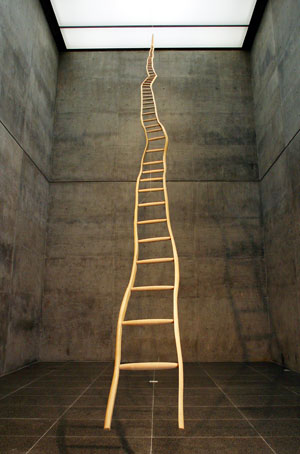 Some of the more recent work overstates its case with imposed narratives that limit it rather than expand it. The Fort Worth Modern owns the technically spectacular Ladder for Booker T. Washington (1996), a 36-foot-tall ash and maple ladder in forced perspective that is admittedly a crowd-pleaser. It invites facile interpretations and it’s willing to lead you by the hand toward making them.

Interviewed in the catalog, Puryear says, “I am trying to make work that describes itself.” That is the real strength of this exhibition. Object by object, you have a chance to enjoy watching the materials come together to be only what they are, and you are then left free to make what associations you wish with what is there.

Charles Dee Mitchell is a freelance writer based in Dallas.

martin puryear is a classy dude

You have a better memory than me, Dee. I had forgotten the Delahunty show. But now that you remind me of it. I remember how impressed, I was with the rawness of his craft in that early 80’s show.. Nice article. Its good to see you loosen up and Puryear to hone his craft and evolve his art.

Although I disguised my intentions by visiting friends in the Metroplex, I made the trip from houston solely for the purpose of seeing this show on closing weekend. Puryear’s organic forms were a perfect contrast to Ando’s crisp architecture. From the stadpoint of pure craft, Puryear seems to be at times making these objects as a display of his virtuosity. Considering it from a sculptor’s point of view however, he is doing some intereresting things with form which are as much built on tradition as the craft. He often merely suggests mass with a relatively small amount of material. While sculptor’s like Serra rely on the actual gravity of the materials. It’s also interesting to compare the geometric and latice sculptures of Eliasson. His works seem to stem from an obsession with the geometry and potential effects on perception, whereas the large lattice piece shown in the article almost represents a giant flour sack. Ashamedly, I am not that familiar with the figures in African-American history that Puryear memorializes to tease a narrative out of those pieces, but they are wonderful works just the same.