There is a lot going on in Smile Forever, your current show at Art Palace: paintings, drawings and one giant sculpture. Across the board, your subject seems to be, for lack of a better word, monsters. How long have you been working on these guys and where did they come from? 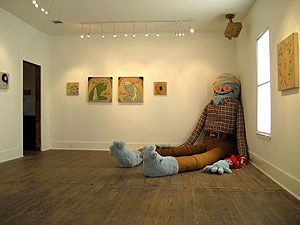 Michael Sieben:
I’ve been working within this style for over 10 years now. The
characters in my work evolved from a fascination with children’s book
illustration, combined with skateboarding illustration from the 1980s.
The marriage of the two styles resulted in imagery that is cute but
gross. I like to use the term “soft-core gore” when describing my
imagery.

AD: The paintings at Art Palace include text as
well as images. Sometimes the text seems like thought bubbles from the
characters, and sometimes it seems like a note from you — something the
image reminds you of, or something you’re thinking about, so that’s
really a note to yourself, I guess. Can you talk a little bit about
your use of language?

MS: The notes to myself are
something that’s fairly new in my work. Much of my older work is very
text heavy, where the words are used as composition elements balancing
the image. The text in the older pieces also completely spelled out
what the piece was addressing. Lately I’ve acknowledged that it’s
totally okay to have some mystery in your work (it turns out all of my
professors were correct). “Varsity Inn Patty Melt” might not mean
anything at all to the viewer, but to me it’s a very loaded phrase. The
text in the newer paintings is definitely more of a personal
investigation. It’s also very stream of consciousness versus something
that’s premeditated. These notes do not serve as graphical elements
like the text in my older work. Some of them are so small that they
don’t even photograph. 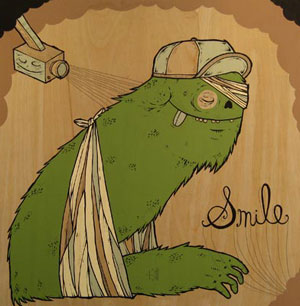 AD: Well, for viewers
familiar with Austin, a lot of the notes resonate. They also give your
paintings an autobiographical slant that works really well. The small
size of many of the notes adds to that sense of intimacy.

The big plush sculpture you made for Smile Forever
is intimate in a different way. I saw a lot of people hug it before
the opening. Is sculpture a new direction for you, and what inspired
this move?

MS: I’ve been playing around with the idea of
adding some sort of sculptural elements to my work for the past year,
mainly just sketching ideas out in my book. But I wanted to wait until
I had a local show so that I wouldn’t have to worry about shipping
charges. Since I’ve never really dabbled in sculpture, I wasn’t sure
how the piece was going to turn out, and I didn’t want to put myself in
a position where I was spending hundreds of dollars shipping something
I wasn’t very proud of. When Arturo approached me about a solo show at
Art Palace, I knew that that was the opportunity I was waiting for,
where I could work on something more ambitious and just drive it over
to his house. I’m really happy with how the piece turned out, and I’m
definitely going to be working on more three-dimensional projects in
the future. I feel that the presence of the sculpture in the show
really changes the way in which the paintings and drawings are viewed.
I feel like they’re somehow more valid in my mind now. (Extra special
thanks to Chrissy Paszalek and Brandy Mac for all of their help with
the sculpture construction.) 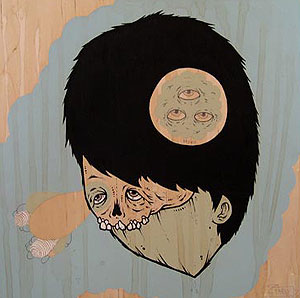 AD: You raise an
interesting point with this notion of validity, which gets at a
question about genre, in a way. Illustration-driven work occupies a
specific niche in some art worlds. We’ve talked a little
bit before about the scene in Los Angeles, where there are a lot of
galleries supporting artists who draw inspiration from street culture
and skate/surf design (The Lab 101 Gallery comes to mind). To me, Camp Fig seemed to function in this way for Austin. Somehow the sculpture in Smile Forever
pushes you out of the illustration niche a little bit and more overtly
into a dialogue with artists working in other modes. That relationship
was always there, but the sculpture definitely changes something.

MS:
I agree. In the past I really wasn’t too concerned with what was going
on in the “real” art world. I grew up within the skateboarding
subculture and was perfectly happy existing within that community. I’ve
had a lot of success showing work in Los Angeles for exactly the
reasons you mentioned. But as I get older, I find myself wanting to
create a dialogue with a larger audience. (More people don’t skateboard
than do skateboard.) Being a part of Okay Mountain
has opened my eyes to a lot of really interesting work that I was
previously unaware of. I feel like working with the other partners at
the Mountain has made me want to push my own work and try to escape the
more rigid classification of what it is that I’m making.

AD:
Okay Mountain will have its one-year anniversary this month. Wow,
congrats! It seems like you guys have been open a lot longer than that.
How did you all get together and decide to start the gallery? 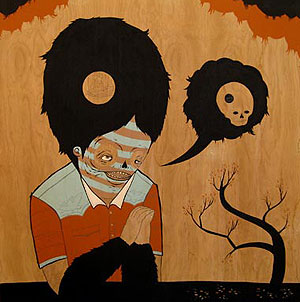 MS:
About half of us were running Camp Fig during its final year. We grew
tired of the physical limitations of the space (it was really, really
small) and the drawbacks of having a space downtown (zero parking.) We
decided to close the space in January of 2006. At the time, our plan
was to find a new space to open the gallery. While we were looking for
another spot, some of the original members of Camp Fig decided to step
away from the gallery, and at the same time we brought in some new
members. All of us decided that rather than continue with Camp Fig, we
should just start something new so that everybody involved would be
there from the very second of its inception. It’s sort of hard to say
exactly how all of us met. I think like-minded people just have a way
of finding each other.

I have to add that running Camp Fig was
really fun, and I think all of us learned quite a bit during the three
and a half years it was around. Looking back on it, I see Camp Fig as
sort of the art equivalent of a dive bar. I don’t mean that in a
negative way at all. But there was definitely something a little seedy
and dangerous about that spot.

AD: I remember those
openings attracting a crowd I didn’t see at other galleries in Austin.
The best way to describe it is the time I bumped into a pair of
chain-bedecked rocker kids totally making out in the gallery, right up
against some drawings pinned to the wall—yeah, kind of like a dive bar.
So of course the energy was good, and a lot of that has carried over to
Okay Mountain (although I haven’t interrupted any make-out sessions
there, at least not yet).

You’ve been moving in some new
directions with your art and with the gallery, but you haven’t totally
abandoned the skate scene, right? You’re the creative director for Bueno Skateboards, and staff writer and illustrator for Thrasher Magazine, plus you just got sponsored. 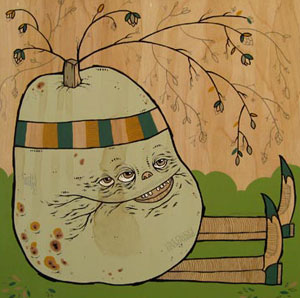 MS:
No, not at all. And I don’t mean to make it sound like I’m not into
skateboarding culture anymore. But most of the work I do commercially
exists within that realm (skateboarding), and it makes me want to make
a separation between my paying jobs and my personal work. I don’t want
to end up being the guy who just creates the same thing over and over
and over. I want my personal artwork to exist on its own, independent
from the work I do to pay my bills. Which leads back to the use of
personal languages or codes within the paintings. The fact that I do so
much commercial work makes me want to create work on my own that
incorporates elements that aren’t marketable to the general public.
Things that only make sense to me. Things that a company wouldn’t want
to purchase from me. Secret codes and catch phrases that aren’t a part
of the communal vocabulary. “Varsity Inn Patty Melt,” for example.

AD:
You deal with your work’s commercial-gallery split in the zine you made
for the show, which has a little bit of everything in it — sketchbook
stuff, paintings, lots of text with thoughts about your work (and about
beer). I thought the book might tell me something about the
surveillance theme that runs throughout Smile Forever, but it didn’t.

MS:
I realized that after dropping it off at the printer. The surveillance
cameras are really new, and when I was first compiling material for the
zine, I wasn’t drawing them yet. I had to have the zine finished a few
weeks before the show so that it could be printed, bound, etc. Smile
Forever II should clear all of that up.

AD: I’m looking forward to it. 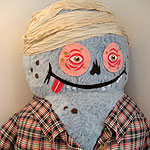 Really great to see Michael front and center on Glasstire…long overdue. His work has really grown over the years and is a huge step in the right direction for Texas artists. Congratulations Michael and Arturo for such a great exhibition.