Judy Pfaff . . . all of the above at Rice Art Gallery

Without motors, computer-controlled video or sound, Judy Pfaff’s . .
.all of the above packs more frenetic energy into the Rice Art
Gallery’s suddenly small seeming space than many more high-tech shows. 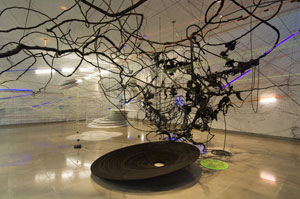 It’s strange to call such a hyperkinetic, all-encompassing art experience old-fashioned, but Pfaff’s approach is primeval: like a fish with feet, Pfaff’s work wobbles precariously between the ponds of painting and sculpture. And no wonder: She’s been doing this since the 1970s, which is the equivalent of the Paleozoic period in art years.

Like a painting, Pfaff’s piece creates its own self-contained world, bounded by the gallery’s walls just as a painting is bounded by its canvas. This work needs the white box: Part of its energy comes from the way it pushes outward and is abruptly chopped off where it hits the wall. For all its space-filling three-dimensionality, there’s a lot of actual painting in it as miles of parallel lines on the gallery’s walls extend the piece into an imaginary infinity.

The speedy scribbles and black and white palette recall the work of Cy Twombly, but Pfaff’s maelstrom is less personal and more upbeat than Twombly’s melancholic scrawls. Like Al Held, her mentor, Pfaff has played it cool, neutralizing carved foam, steel rods, rattan vines and strings with a unifying coat of black or white paint. She has spiced her piece with sparse tidbits of more evocative materials: fluorescent Plexiglas discs for their futuristic glow, skeletal umbrellas for their figurative allusions, light bulbs and lead balls for punctuation. 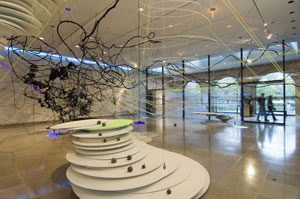 Pfaff’s piece combines nature and culture, too. . . . all of the above is a romantic grotto, full of artfully arranged, twisting passageways and openings. Things hang overhead. You have to duck and sidestep, aware of the piece on a basic physical level. Vortexes in black wood and white steel are a little too obviously whirlwinds, complete with skeletal umbrellas, but it’s equally a vision of a William Gibson’s humming cyberspace, crisscrossed with an energized grid of signals and disrupted by tangles of black static. Weightless circles hover like futuristic cities.

When I was in art school in the early ’80s, Pfaff was one of those last-minute additions at the end of the standard art-history textbook. It was clear she deserved a place in art history, as an installation artist and as a woman, but they didn’t know just how to fit her in. It was also clear, even then, that this was the direction that art was going in, though no one could have imagined how solidly mainstream installation would become. In the past 15 years, the genre Pfaff helped create has become business as usual for younger artists. 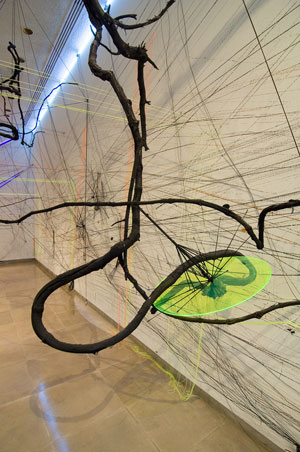 Back in the day, it was easy to imagine her as a latter-day abstract expressionist, bursting off the canvas into real space. That’s how she was sold, too. In those days, Pfaff jokingly complained that her art dealer was always pushing her to work closer to the wall because flatter pieces were easier to sell. Since then, the split between what sells and what’s exciting to look at has only widened. Compared with the dirt, the angst and the pathos of earlier installation-like art by Yayoi Kusama, Jean Tinguely or Eva Hesse, Pfaff’s pieces had energy and optimism. They were clearly the wave of the future. Like multimedia, digital and computer art today, Pfaff’s opportunistic, open-ended installations had obvious, enormous possibilities.

Pfaff’s installations are not very portable, and neither am I, so I know Pfaff’s work only through photographs. That makes putting . . .all of the above in context a chancy business. It seems more like her tangled, linear pieces from the early eighties than the blockier, I’d say even cubist, pieces in between. The installation at Rice is also one of her least colorful, putting it in line with a couple of recent austere, monochrome pieces, which I haven’t actually seen either. That’s as far as I’ll go.

When historians associate Pfaff with Pattern and Decoration, that short-lived art fad near the end of the modern period, what they mean is that she painted things in different colors. It was a big deal. Sculpture was trapped in a dour, puritanical fetish labeled “truth to materials.” That tiny heresy widened like a gap in a New Orleans levee to admit not only color, but also everything else until today art flows in an undifferentiated flood.

Here in Houston, we love sprawling chaos, grand gestures and wide-open spaces. Pfaff’s piece is all of the above.

Bill Davenport is an artist and writer living in Houston. Davenport was one of the first contributors to Glasstire and now writes a Houston Art Letter in our Blog section. 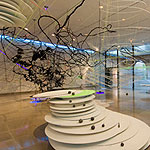