Rita Gonzalez sits down with Adrian Esparza to interview him about his work. Esparza will be included in an upcoming exhibition at the
Los Angeles County Museum of Art entitled Phantom Sightings: Art After
the Chicano Movement. 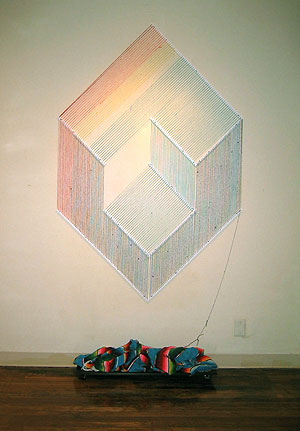 Rita Gonzalez: Recycling and the consideration of castaway objects are important to your work. Could you talk about the rasquache ingenuity in your family, and how that has shaped your own approach to art?

Adrian Esparza: Growing up in El Paso, I had little exposure to historical art. My first exposure to art was through craft. Early memories include manipulating Popsicle sticks, carving balsa wood, making ceramics with my grandmother, and seeing my mother sewing clothing and my uncle building guitars. Hands were manipulating objects, and careful calculations were necessary in order to conserve resources and complete a project successfully. Craft laid the foundation for the formal issues that I would later learn in school. I view craft now as a mental exploration and exercise. Through trial and repetition, I have come to trust the formal decisions that I make.

Setting this awareness aside, I approach found objects with a kind of assertiveness. Growing up, I remember objects being used again and again, broken objects being restored, and the simplest object becoming valuable. So, I return to the found object and attempt to re-instill a kind of lost value.

The fact that the objects I use stem from pop culture indicates my sensitivity to visual stimulation. I think about my work as tangible images that flash before me as I close my eyes at night. Making no deep claims, I am simply using the current visual stimulus to form memories of culture and change.

RG: How did you start doing the sarape pieces? And how have they evolved?

AE: The sarape pieces arrived due to my limited language understanding. My reading and comprehension skills have never been that strong, so when I read something, I had to read it a few times. I would even get tracing paper and actually trace the sentence or paragraph. This process caused me to slow down and analyze each word. When I started at Cal Arts, I was creating realistic paintings that were acknowledged on a technical level but were dismissed on a conceptual basis. I would later abandon paint, but I continued to examine the objects around me.

The night before my thesis show, I had very little to present. Looking around my studio/bedroom, I noticed the beautiful object that had been keeping me warm all these months. The sarape that I had brought from El Paso seemed to be the solution. Threads appeared thick as rope when I held it up to my face; colored thread simulated stained glass when I used the sarape as a curtain during the day; and the object itself was like a companion that had traveled with me to this new land.

I needed to destroy the object in order to realize its power and to create it anew. The sarape revealed line in the midst of a grid, the same grid that once defined the location of ancient pyramids, contributed to the structure of modernism and now ruled the realm of the pixel. I placed the sarape on the wall and began to unravel the object. I wound the thread onto a spool until there was enough to construct a form. I hammered two rows of nails parallel to each other. I then extended the thread back and forth between the columns of nails. I had created a painting without paint.

I would recreate this piece for Come Forward: Emerging Artists from Texas (2003) and titled it Here and There. The title defined the process while opening up other contextual concerns. I have since then incorporated these pieces into my visual language. The forms are becoming more complicated, inspired by architecture, landscape and alien forms that may rise over the horizon at any moment. I now put the nails on strips for easier installation. Each piece is accompanied with a booklet that explains its installation and de-installation.

The sarape pieces are about transformation — about a history that is used in order to construct a new form. They are also about a diffusion of color and the expansion of space. The side-by-side forms create a dialogue while revealing the repetitive process of distance traveled and perhaps even the act of reading itself. 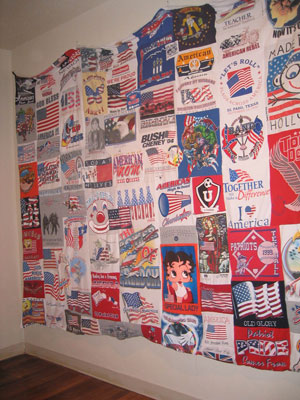 RG: I am really intrigued by what you said about how in your weaving projects you were not so much interested in their reference to craft as you were to the "pixel." What is really interesting about your work is how the formal considerations are melded with your contextual considerations. That is to say, how things like a pixel-lag (or "gap," as you called it) are made into formal operations for you.

AD: Perhaps these are two-dimensional replications of the way the mind stores information. Images and memories digitally melt into one another. Technology abandons analog only to strive toward it again with the pixel. The grid should be so small as to be organic. Like the foot that travels from one step to the next, information is missed from one pixel to the next. Posters and pop culture allow for an abundance of information. The image is used and then abandoned on a daily basis. The rapid, repetitious image hopes to be solidified within these larger multi-poster pieces.

RG: There is also something really particular to border regions — without being so specifically about the US/Mexico dynamic — the way you are weaving in (literally) the multiple references that coexist at this point in a really unquestioned way. It's not about how these signs are clashing anymore. Heavy metal, hip hop, the US military, Chilindrina — all these things coexist and have similar weight. Does that characterize your perspective or are you more drawn to the clashes? The poster and the T-shirt are both ways to emblazon one's space and one's identity. Is that what initially drew you to working with these materials?

AE: The poster pieces were inspired by a visit to an open house one Saturday morning. I entered a home looking at its possibilities and was not that impressed. However, I then entered what appeared to be an abandoned teenage sanctuary from the late 1970s. Given my own visual memories from this period, I immediately identified with the images that had been wheat-pasted to the walls. Every space was addressed, one poster overlapping the next. Whims and tendencies were archived within a 10 x 12-foot space. Even the ceiling was memorialized with pop idealism. Dreams and impressions stood still, awaiting this moment of validation. A goal had been established by an unknown independent artist. You mentioned using posters to emblazon one's space and establish identity, and she had achieved this declaration perfectly.

I have always found inspiration in ancient reliefs, Baroque adornment and the structural viscosity of art nouveau architecture. Murals, graffiti art and tattoos also establish identity while infiltrating space. The grid is used with the posters. Geometric disintegration establishes neutrality, a point of origin where a story can begin again.

The T-shirts speak to the power of objects and observation. The fact that people once wore these images and words is interesting. The world can tell you things, leading you in many directions. Power and influence once exerted as advertisement is now sold at Goodwill for a $1.50. I scan and edit the images, allowing them to create a story in the midst of the grid. The objects created allude to quilts, banners or even flags. 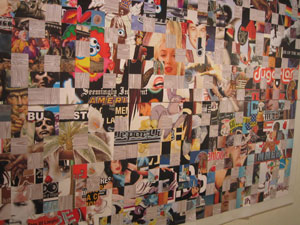 RG: And you also have a whole body of drawings that are done on surfaces as diverse as mylar and bedsheets. Can you talk a bit about your process — with at times extremely repetitious and obsessive patterns?

AE: The majority of my drawings are done with a rapidiogragh pen in black ink. The physical properties of the instrument contribute to the exact lines left on the white ground. My earliest memories of direct visual creativity occurred during high school using this same kind of pen. Idealized surrealistic imagery continues to make their way into the new images in my drawings. Like an architect who has entered a universe where gravity no longer exists, I have little regard for contemporary issues within the drawings. I instead enter a free space that is influenced by the notions of Deleuze and Guattari, Borges and the Flatlands of Abbot. My drawings are ideas, geometric forms and tracings that combine to form organic spaces. However, this non-consequential environment contributes to a sense of insecurity when I present my drawings to the public. I have little confidence in letting the drawings exist as they are. So I convert the images to cloth, sheets or even the wall directly. I am aware that this process may be a form of editing or perhaps a physical transformation needed to validate their existence, but I enjoy the conflict and may slowly come to accept this as a productive process.

RG: And what projects are you currently working on?

AE: I have recently completed two drawings that are examples of this personal turmoil. One drawing depicts the images of US movie stars from the 1930s and 1940s, while the other drawing shows Mexican movie stars from that same period. I made both drawings during a low creative period within my cyclic production of art. No rules or concepts were applied, merely the observation of faces that led to the organic depictions of two cultures on plastic mylar. I defined certain forms and faces by adding three colors randomly, creating a kind of pattern. Though personally satisfied with the drawings, I hesitate to present them as they are. Interior design has influenced my work and I have thought of transposing these drawings onto fabric. I would then upholster one chair with the US portraits while the upholstery of the other chair would display Mexican portraits. The two chairs would then be presented together, depicting each culture existing side-by-side in an even more physical manner.

This interview was conducted through e-mail and over the phone during the months of December 2006-January 2007.

Rita Gonzalez is the Assistant Curator for American Art at LACMA. 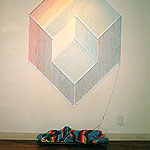