Simplon Pass is the narrow Alps passage between Italy and Switzerland. William Wordsworth called it “gloomy,” seeing in its depressing weather patterns and bombastic topography, the “workings of one mind, the features of the same face, blossoms upon one tree, characters of the great Apocalypse.” 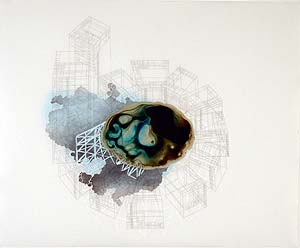 Eric Zimmerman’s latest collection of drawings, titled Simplon Pass, comprises a pictorial narrative. Zimmerman, like Wordsworth, has captured the moody aura of a specific landscape, but he also tells a story. Taking inspiration from utopian buildings, such as Britain’s Crystal Palace (1851), a massive, iron and glass exhibition hall constructed for the World’s Fair, he has created a stunning group of architectural drawings on sheets of Denril vellum that tells the story of one civilization, one landscape and, most obliquely, one earth.

Hung at the entrance of the gallery, Turner’s Palace Right (For Arturo) and Turner’s Palace Left (For Arturo) establish the story’s setting. The drawings are large in scale, with solid architectural maps in the background and unpredictable fields of colored ink in the foreground. The graphite maps and ink additions represent a key fissure between the real, or the known, and the ephemeral. This combative relationship is apparent in every picture in Zimmerman’s show, but what’s most striking about these first drawings is the color choice. Shades of orange and blue can seem like cheery bursts together, but here they depict a violent explosion in a happy place, as if we’re seeing a hot air balloon burst into flames. 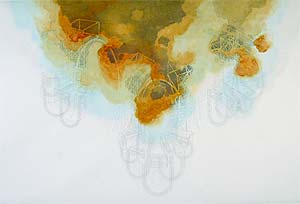 The gallery’s western wall includes a series of nine small drawings, the Floe series, which are some of the strongest works in the show. Each drawing serves as a puzzle piece that fits with those around to depict a fixed, planned architectural structure interrupted by a kinetic mass of ink. On the one hand, the moody wells of color are fetus-like, all veins and black and blue. On the other, the ink looks like pollution, the ozone blanket common in car-centric regions like the eastern edges of L.A. County. In Greenhoods Growth House, Zimmerman has pushed this environmental allusion even further by creating an aerial view, thus shifting the work’s perspective. In these two large-scale drawings, the architectural structures are resistant victims of the increasingly menacing blobs that obscure them.

In Responsive City , three drawings in the second room of the gallery, Zimmerman rotated the architectural structures by various degrees in each picture. This time the blob is fixed, like a black cloud, while the “city” map moves and adjusts to its new reality. This is perversely optimistic in that the next four drawings, titled Ruins/Future, depict a lovely mess. In this series” square arrangement, Zimmerman returned to orange and blue, spreading it across each piece of plastic and engulfing the architectural structures. Though this vision of the future suggests a splintering exodus, it preserves a sense of interconnectivity because each drawing depends on its series mate for symmetry. It’s a push-pull arrangement that, in color and perception, echoes the state of earlier works in the show.

Crystal Palace/Simplon Pass #1 (For Amanda) completes this circle. It appends a fitting “the end” to the story as blue and orange ink hovers above the architectural structures in a balanced compromise. Significantly, the structures dip down in teardrop shapes, rather than upward in a tall tale of promise and industry. Zimmerman’s extraordinary show, in its entirety, tells the story of one changing landscape, a civilization altered and manipulated by outside influences, by its own undoing or by Zimmerman himself. The anthropomorphic qualities of his ink blobs are hardly accidental. After all, humans are responsible for the construction and dismantling of their own utopias; perhaps, in the end, we’ll help care for the new one we’re inevitably ushering in.

Marie-Adele Moniot is a writer based in Austin. 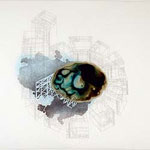