Hovering Between Reality and Illusion in Vik Muniz’s Equivalents: The Room with the Clouds

Southern Methodist University’s dignified Pollock Gallery, sectioned off from the surrounding bustle of the university campus, offers a quite place for contemplation. 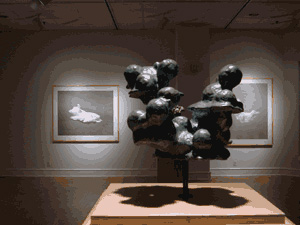 Superficially, the current installation of Vik Muniz’s Equivalents: The Room with the Clouds, on loan from the West Collection, maintains the gallery’s tranquil character. Muniz’s finely framed photographs and bronze sculptures atop pedestals settle comfortably into the gallery. Anyone familiar with Muniz’s work, however, knows there’s more to the story than this initial perception.

In a postmodern extension of Alfred Stieglitz’s 1920s Equivalent series, Muniz sculpted and then photographed cotton balls to mimic cloud formations. Whereas Stieglitz maximized the abstract quality of clouds, Muniz encourages a more tangible encounter. Both artists layer their images with meaning. The exhibition title not only references Stieglitz’s earlier photographic venture, but also Muniz’s comparison between the aesthetic aspects of clouds and cotton. In so doing he blurs distinctions between sculpture and photography and, ultimately, between actuality and invention. 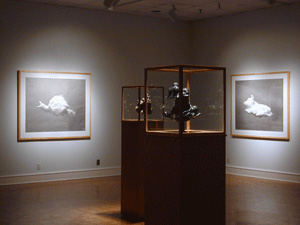 When viewing the works from a distance, the four- and five-feet tall photographs convincingly read as cloud scenes, which, delightfully, happen to look like a long-necked duck, a person rowing a canoe, or perhaps a squat teakettle. The closer you approach one of Muniz’s prints, though, the fuzzier the scene appears, until even the slightest gradation shift breaks down into grainy gray blips. By manipulating scale and clarity, Muniz produces images that hover between reality and illusion, like a distant childhood memory or a tabloid snapshot. Despite technological advances in photo-manipulation, photography still retains a certain authority as a documentary device. Muniz plays on the camera’s credibility, composing images that seem real, but are instead wholly absurd. These celestial scenes could take place anywhere or everywhere — Muniz does not indicate any landmarks to bind them to a specific place or instant. The veracity of the images, like the substance of the cloud, is just out of our grasp. Without site associations these fantasies, Muniz implies, could appear anywhere to anybody. What if a cloud really looked just like a kitten? Through this morphing of the mundane — cotton balls into clouds, clouds into cats — Muniz invites us to look at the world around us with renewed inquisitiveness. But still, we see the graininess of the photo, and it’s left to us whether or not to believe in the reality of Muniz’s clouds.

Muniz adds a further dimension to his Equivalents with his series of bronze sculptures, which also imitate cloud configurations. Like Gianlorenzo Bernini’s baroque, marble rendering of heavenly clouds in the Ecstasy of Saint Teresa, Muniz’s abstract bronze forms also defy their medium’s weightiness. His bulbous bronzes seem to float in space, elevated several inches above their pedestals. Beyond this evocation of buoyancy in an inherently dense material, however, the comparison between Bernini and Muniz falters, as Muniz exposes his medium’s inevitable inertia. The bronzes, though raised above their pedestals, are nonetheless upheld with thick, metal rods. The sculptures’ dark surfaces similarly resist any errant implications of frothy weightlessness. An all-too-honest magician, Muniz shows us the man behind the curtain, letting us in on the secret behind his apparition. 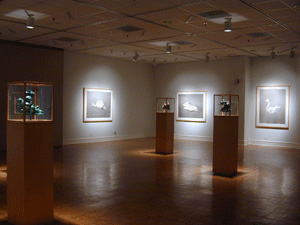 As with the photographs, the amorphously shaped bronzes provoke the viewer to make imaginative leaps in reading layers of representation. Is that a pig’s head stretching out from the central bulge? A tortoise’s shell? Boreas’s puffed-out cheeks…? Whereas the photographs hint at their subject with titles such as Kitty Cloud, the bronzes remain untitled, giving full rein to the viewer’s own imaginative interpretations.

Surface appearances — whether of the formal gallery space or of a simple cotton puff — can easily mislead. Transforming both domestic and fine art materials into wispy clouds, Muniz constructs an outlandish illusion, in which otherwise nebulous shapes take on an illustrative life of their own. But do we trust the reality of Muniz’s Equivalents? After all, the photos are coarse and the bronzes are supported by dowels. The ultimate fibber, Muniz directs attention to the act of fabrication, laying bare his invention rather than concealing it with a seamless deception. Does it even matter if these cloudscapes are real or imagined? Fact and fiction are, in this installation, equivalent.

Catherine Deitchman is a writer living in Dallas. 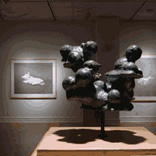