Being Seriously Playful at UTEP

With its brand new multimillion dollar visual arts center, UTEP has created an extraordinary opportunity to showcase contemporary art in this far-flung community. 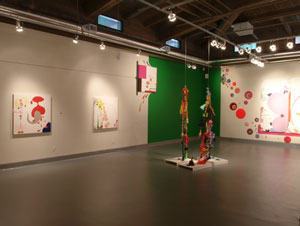 Like the recent efforts of UT Austin’s Creative Research Laboratory and the Rice University Art Gallery to more actively involve students in its programming, UTEP’s Center, according to director Kate Boninsinga, has collaboration with students and the community as its goal. This will be through lectures, as well as through involving students in various installations. Even before the Center opened, Korean-born, New York-based artist Sook Jin Jo created a free standing installation entitled Wishing Worlds. She asked students to gather objects from El Paso and Juarez representing their wishes for world peace to hang on the form. Over time, different objects will be hung, creating an ever-changing installation.

If you are going to open a beautiful new arts center, you might as well have fun doing it, and Kate Bonansinga chose El Paso-born, New York-based artist Paul Henry Ramirez to inaugurate the new Center with a show entitled Seriously Playful. Ramirez attended UTEP from 1986-1987, moved to New York in 1991, and has gained national and international recognition for his work. His first major one-man show was at Caren Golden Fine Art in New York in 1997. He then went on to the Aldrich Museum in Ridgefield, Connecticut. Since then he has shown on both coasts, at Diverseworks, at the Whitney Museum, this past month at Mary Boone Gallery, as well as in his current installation at UTEP.

In an interview with Ian Berry for his Elevatious Transcendualistic show at Skidmore College, he indicates his concerns with accentuating the internal/external male/female body combinations and his interest in spontaneous and fluid movement. He also points out that “I have been working with visual merchandising for most of my adult life, so it has had an effect on my work as an artist. I don’t think that I ever consciously incorporated retail design work, but a lot of skills do overlap. Display work deals with presentation, transforming space and the consideration of the viewer’s response. It has trained my eye to clearly visualize how something will look before actually implementing a project.” He also is extremely particular about his surfaces and lines, going over each line eight times, and using nine layers of gesso and sand to get the surface sufficiently smooth. 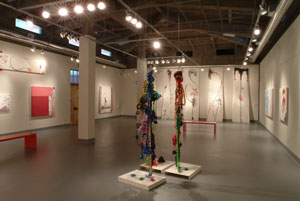 Seriously Playful includes works ranging from 1995 to the present, and demonstrates a coherent vision of movement and play. For the exhibit, the walls were painted with the same bright pink, blue and green cartoon-like colors and with many of the same forms found on the individual pieces, making the large room come alive with movement. The viewer moves from the works to the walls and back, circling the room with a free interaction between the two surfaces, engulfed in this exploration of shapes and forms.

Ramirez’ images are, for the most part, overtly sexual, with attenuated hair, breasts and genitalia, though many are simply geometric shapes moving into each other, penetrating, squirting on — interacting in ways which seem playful, like stills from a slightly demented cartoon. Along one wall hang enormously long sheets of paper on which elegant, attenuated swirls reference hair and body parts. Along the other walls, pieces from various series such as the Space Addiction Series, the Elevations Transcendualistic Series, as well as others, blend seamlessly into a bright, joyful arena. This room just wants to have fun. The show also includes sculpture, some furniture and a soundtrack composed by Ramirez with So Takahashi. This minimalist audio is perhaps the serious part of the fun. It is beautiful and haunting, but I’m not sure how it fits with the sloshing and flowing, drawing up and extending out going on all over the walls and the canvas.

On exhibit in the next gallery space is a show of recent works by UTEP graduates. These former students have now had enough time to develop ideas, as they have been out for roughly 10 years. Nick Munoz works with both sculpture and paint. His works are deceptively simple. Saturated glossy color is sprayed over stencils onto wood which is then layered into sculptural form; there is nothing to it until you stop and look. Then you see first how the circles and stripes flow into each other, then how the stripes both blend in and stand apart. Tension erupts as the two-dimensional paint interacts with the three-dimensional sculpture, flowing in and around, then separating. Each piece in this series is not as static as it first seems, but contains internal movement. When the works are hung in series (as they are here) each one plays off the others.

Sam Reveles has apparently long been fascinated with Indian tantric art, and here pays homage to this form, and also to the Indian scholar A. Mookerjee. These paintings, a series entitled Scroll Study for A. Mookerjee, numbers 1-7 are founded on a red ground out of which energetic swirls of lines emerge in different colors — pink, blue, orange and white with a single yellow line extending upward in the background. That these bursts of color represent the Tantric energy swirling up and out of the body is apparent; that this would have seemed so without the accompanying explanation is less so. 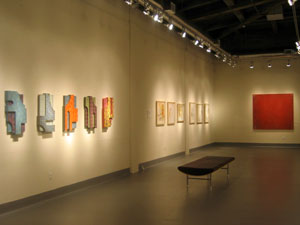 Hector Romero has lived on both coasts and infuses his works with pop culture. Densely packed figures on paper, they look like nothing so much as the doodling of that kid in the back of the classroom (or like the work of scores of artists and art students out there which we’ve all seen plenty of already). But perhaps I’m missing something. In any case, there are works like God Cloud, with the word “God” emerging from some sort of form set against a large space full of various pop culture figures. In Something Tells me I Must be Wrong, Romero has smeared white paint over the work, allowing only a few scribbled images to emerge. You get the idea.

Monica Aisa Martinez gives us her take on Virtue and Vice. Individual portrayals of various sins and virtues are bookended by the opening and closing acts of a theater set introducing her characters. First is The World Stage — a Play in Finite Acts, in which the characters, distorted cartoonish creatures, greet us from the footlights. Gluttony, for instance, is forever feeding herself and we see within her stomach slices of pizza, sandwiches, etc. Then each vice and virtue has its own portrait with thoughts on what might give rise to that vice or virtue, written on and around the canvas. Finally, there is The Final Curtain Call — The All That I Am. All of the characters again take their final bows: there is a woman balancing on a globe, someone levitating on a magic, and a repeated figure throughout the piece who holds up books entitled justice, temperance and fortitude. The distorted characters makes one think of Hieronymus Bosch with dialogue and cartoons for our times, an interesting new exploration of a very old subject.

The new UTEP facility will surely see some great programming in the future, especially with the able Kate Boninsinga at the helm.

Images courtesy the artists and the Stanlee and Gerald Rubin Center for the Visual Arts. 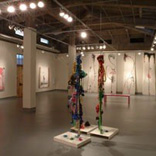