In our post- post- reality, artists are charged with inventing a durable expression so that they can repeat themselves and manifest a public persona. 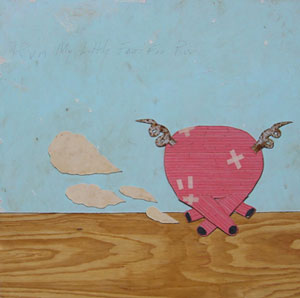 Kirk Hayes’ new work at Conduit Gallery accomplishes recognizability with a steady hand that performs a magic trick of the eye, making the mouse that morphed into the lion and then tap danced to the beat of the band-aid.

Saying one thing while demonstrating another is the mark of the ironist. All sophisticated art partakes of this until we either forget the Greeks or something about us changes significantly enough so that the ironic stance no longer gives pleasure. When mixed with that denial of our desires called "coolness," this often becomes so negating that you practically have to be suicidal to bask in its virtuosity. A clever artist can talk you down off the ledge of cool irony long enough to have a little laugh and a nice cup of coffee. Kirk Hayes is one of these talented persons, and self-taught to boot.

His current crop of good humor plucks the little piggy out of the briar patch long enough for him to go on a bender, and then scurry back into the top hat where he lives with his lover the rabbit. Did I mention that Mr. Hayes is a landscape architect by day? I wonder what his creations in soil and plants and rock are like. Like the take-back-the-neighborhood gardens in poor sections of northeastern cities, Hayes’ art features a cheerful, seemingly random collection of colored pieces of cardboard, metal scraps and dirty signboard on plywood. All quite nice, actually. 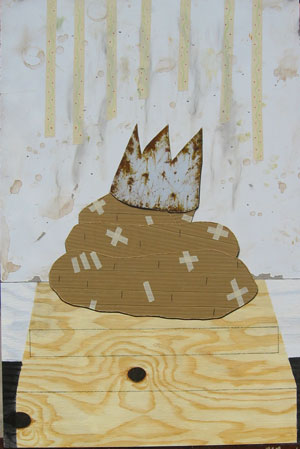 And if that was all Hayes’ work were, it would still be compelling and wonderful, though perhaps Hayes would not be able to repeat himself without fatigue setting in. The wow factor is that these insouciant single-frame cartoons are completely made of oil paint on signboard. There is no plywood, no corrugated cardboard, no snipped, carefully applied tin, no tape. It is a perfect simulation. This allows Hayes to sit on both sides of the see-saw-like fulcrum of his practice and recreate all day. The holy paint is applied to the holy surface to create the most unholy assemblage, which enunciates the artist’s frustration while keeping it real. Socrates” ghost is raised from the dead. His spirit says, "I’m sorry, I don’t understand what you’re saying, could you please explain what you mean."

The near pepto-bismol shade of pink that Hayes uses evokes both pigs and pink elephants. It pops against the placid matte backgrounds exactly where it needs to be. The titles are often written in pencil on the work. Run My Little Foo Foo Run is a dual-assed, frenetic cardboard pig whose curly tails belie the direction of Foo Foo’s flight, which is then explained by the cardboard puffs of smoke that say "left to right" to the eye’s mind. This "not not" semiotic construct is repeated in different ways. Tape is represented in X’s and strips, often with little red X’s on top. Thus X-marks-the-spot, as well as dresses the wounds of the battered characters who populate Hayes’ invented universe.

Coronation is a virtual plywood step with a pile of steaming, battered matter, crowned and almost dignified. The Couple are joined at the lips, standing on their plywood table looking, once again, battered and held together by tape and love. Strength and weakness live side by side in the same mind.

Also at Conduit Gallery is Michael Roch, whose clouds and textured, colorful works on dry wall juxtaposes respectably with Hayes’ smoothness. Adrian Esparza of Come Forward fame is in the project room. Applause to Nancy Whiteneck and her curatorial staff for a most excellent fall offering.

Mark Babcock is a writer and artist living in Dallas. 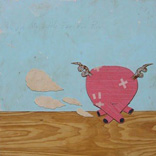