Most collection shows chart a succession of iconic masterpieces. Selected by dint of size or reputation, they enforce a sort of cultural Stations of the Cross, with individual acts of genius venerated in spotlighted isolation. 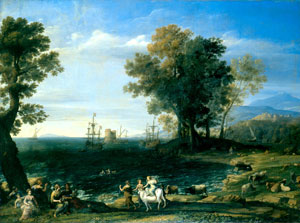 Old Masters, Impressionists & Moderns: French Masterworks from the State Pushkin Museum, Moscow is a happy exception to this rule. Contextualization is everything here, and the show’s installation highlights both the juxtapositions between artists who were contemporary rivals and the equally fascinating backstory of the Russian collectors who vied to attain their work.

But why French? Philosopher and critic Denis Diderot was the culprit. Empress Catherine the Great was one of a dozen European royals who subscribed to the pioneering critiques of the Parisian salons he began writing in the 1760s. Catherine collected avidly, using Diderot’s words as a template; her vast collection formed the core of both the Pushkin and Hermitage museums.

Scions of aristocratic families like the Baryatinskys and Golitsyns (portrayed here by Vigée-Lebrun, Nattier, and Drouais) emulated Catherine’s collecting example. Since many aristocrats had strong trade or diplomatic ties to Paris, they maintained a French interest even as they diversified into other European styles. This tradition continued into the twilight of the czars and the advent of modernism, with Moscow businessmen Sergei Shchukin and Ivan Morozov competing for some of the most dynamic paintings of French Post-Impressionism and early Cubism. As a result, the Pushkin’s holdings include more than 250 French paintings. 76 paintings made the trip to Houston; two-thirds have never visited America before. They tell the history of French painting (and of modernism) as series of competitions, conversations, and linkages. 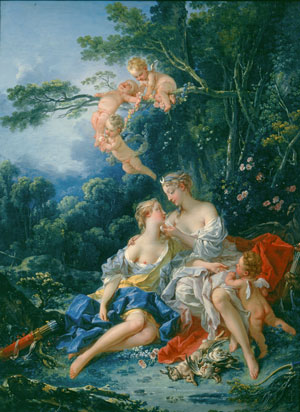 Two seventeenth century precedents — Poussin’s Rinaldo and Armida and Lorrain’s The Abduction of Europa — open the show. These Arcadian mythologies are juxtaposed with three works by François Boucher. Diderot loved to tweak Louis XV’s court painter as the master of “affectations, mannerisms, and red bottoms.” These characteristics are evident in Nativity (cutely chaste religiosity); Farm (idealized nature); and Jupiter and Callisto (bawdy same-sex vignette). Boucher was a prominent member of the Academy, influential on the king’s royal commission selection process. Contemporaries like Vernet and Van Loo, represented here by allegorical landscapes, struggled to navigate a path between courtly fashion and historical precedent. Chardin and Greuze, who did produce alternatives to the prevailing Academic tendencies, were also collected by Catherine the Great, but neither is represented here — a striking omission.

Hubert Robert’s large, strongly vertical Ruins paintings flank the entrance into the second gallery. The disquiet lurking in his seemingly bucolic vistas anticipates the coming terror of revolution, embodied artistically by David, represented here by Andromache Mourning Hector, and its roiling aftermath, encapsulated in Ingres” weird Virgin with Chalice. Whether because of Pushkin prerogatives, MFAH wish list, or fragile condition, Old Masters, Impressionists & Moderns avoids the Pushkin’s holdings in Romantic painters like Géricault, Delacroix, and Gros. Instead, it offers a succession of intimately scaled genre narratives, like Boilly’s melodramatic The Swoon and Couture’s juicy sketch Supper After the Fancy Dress Ball.

Those interested in contemporary art will probably feel that this doesn’t impact the work they really care about (Impressionism and beyond). But it does, if for no other reason than to illustrate the box French art built for itself in order to create the crisis that produced Impressionism. The earlier paintings are also reminders that Impressionism was in some sense a return to the privileged position Poussin and Lorrain had established for landscape. Corot, Troyon, Courbet, Millet, Daubigny, and Diaz de la Peña positioned themselves outdoors, describing the world around them. Good-bye bucolic vistas and rose-cheeked goddesses; hello weather events and working class subjects. Corot’s A Gust of Wind and Courbet’s The Sea, installed on opposite walls, concisely summarize the divergent approaches these artists used to dramatize “realism.” 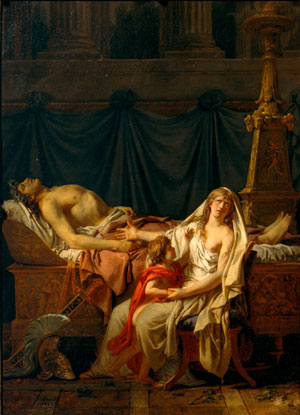 Impressionism makes an offhand, almost prosaic entrance in this show — canvases by Pissarro, Manet, Monet, Sisley, and Renoir that are smallish in scale and either sketchy or notational in execution. But the ability to triangulate Manet’s The Bar (prelude to Bar at the Folies-Berger), Renoir’s In the Garden (antidote to The Boating Party), and Monet’s Boulevard des Capucines (hallmark of every Impressionism art history lecture) is a joy. You quickly recognize that these artists, each from a different social strata and Parisian neighborhood, were competing — were trying to carve out an artistic “turf” for themselves. No longer a monolithic tomb, Impressionism suddenly seems interesting.

Thanks to Messrs. Shchukin and Morozov the Pushkin owns plenty of work by Van Gogh, Gauguin, and Cezanne, and multiple examples by each create a similar interplay in the next gallery. Cezanne’s Pierrot and Harlequin and The Pipe Smoker catalyze his proto-cubist development, Gauguin’s Tahitian idylls offer a major reshaping of the Arcadian themes that opened the show, and Van Gogh’s neuroses, in The Prison Courtyard and Portrait of Dr. Rey, remain uniquely his own. The large gallery that follows is dominated by Rousseau’s baldly painted but riveting Jaguar Attacking a Horse, Bonnard’s hallucinogenic Summer in Normandy, and two more Cezannes: a small Bathers sketch, and the very productively unfinished The Aqueduct. Having come this far at a measured pace, the show ends in a hurry, cramming a final gallery with blue, rose, and early cubist Picassos, a vibrant Braque cubist still life, and three signature Matisses: Goldfish, Nasturtiums and The Dance, and Calla Lilies, Irises, and Mimosas. 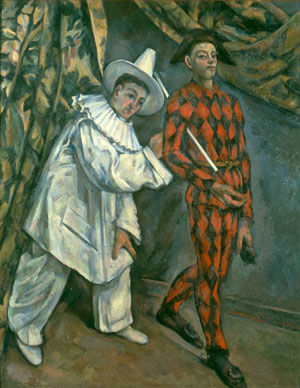 Much of this show’s success is due to the subtle care it takes to sustain a historical narrative. Credit for this belongs both to MFAH curators Janet Landay and Peter Bowron, and to the Pushkin’s venerable director, Mme. Irina Antonova. The show does include a few jarring examples of silly-putty positioning, such as placing the enormous and stupefying late nineteenth-century provincialism of Jules Bastien-LePage’s Village Lover (reputedly one of the Pushkin’s most popular paintings) in jarringly ahistorical proximity to works by Corot and Courbet. Similarly, two small, wonderful turn-of-the century Parisian landscapes by Matisse’s contemporary Albert Marquet inhabit the Impressionism gallery, where most of the paintings date to the time of Marquet’s birth in 1875.

But I quibble. The best part of this show is how it dusts off history and refreshes it by placing viewers in proximity to it. While you can’t touch the paintings, you can do the next best thing, which is go and see them for yourself. And hope for more, since this is the first of a series of planned exchange exhibitions intended to benefit both the MFAH (high quality historical art to flesh out the new building) and the Pushkin (money and international recognition). As MFAH initiates more export projects, like the selection of Glassell gold that traveled to Moscow in 2001, we can anticipate Pushkin imports, perhaps drawn from their substantial Italian and Flemish holdings.

Images courtesy the The Museum of Fine Arts, Houston 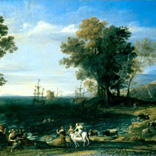