Even from behind, I couldn’t mistake the stringy, leather-jacketed silhouette of Hills Snyder, watching the World Series at a bar in Terminal D. Turns out we were taking the same plane to London, flying over to add ourselves to the bulging load of American artists already there. A sprawling group show, theamericans.new.art at the Barbican has 30, including former Core Fellow Julie Mehretu. PAN, at the Czech center, has five more, including me; and Ruby, the inaugural show at Pearl, has Hills Snyder. 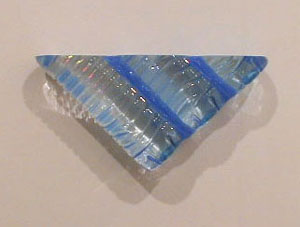 Pearl itself has Texan connections; it’s a byproduct of the extensive remodeling that former San Antonian Jeff McMillan and Cornelia Parker have made to their industrial live/work space in Shoreditch after the birth of their new daughter. Clean walls, unobtrusive lighting, and an immensely high timbered ceiling make it easily the most professional looking gallery-in someone’s-studio I’ve ever seen; only the canvas-draped bookshelf behind the door hinted at the space’s other uses. Three artists in two rooms opened the space on its buzzing first night. 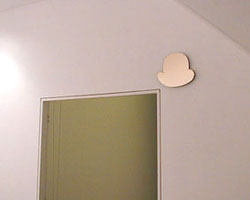 Ana Prada reincarnates negligible, commonplace objects as formal compositions. In Aquamarine three plastic water bottles are glued together, cut at a precise 45-degree angle, and filled to the brim with water to form a chunky crystalline wedge. Its gemlike reflections and apparent solidity are strongly at odds with its trashy materials. Striped Composition is more humdrum; a row of deflated red balloons stretched between gleaming columns of staples; the contrast of sharp/metallic vs. stretchy/plastic is OK, but too tiny to be compelling on a physical basis alone. 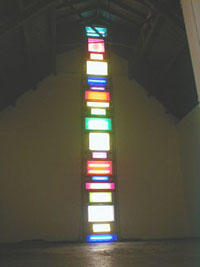 Hills Snyder explores US-UK relations in three acts: Manifest, a pink vinyl blot like an animal skin, glowing in the garish light from David Batchelor’s piece, looks better than it did at James Gallery earlier this year. It’s as if Snyder has skinned an inflatable Easter bunny and nailed its hide to the wall. Spanner, a mirrored bowler hat in silhouette, is perched atop a doorway, giving a cheeky “cheerio, chaps!” to the rest of the show. Kith, an outsize medieval sword carved into the plasterboard wall, relates the heavy wooden beams in the gallery’s roof with the narrow, cobbled street outside to brew a mythological saga, like graffiti left behind by Beowulf. 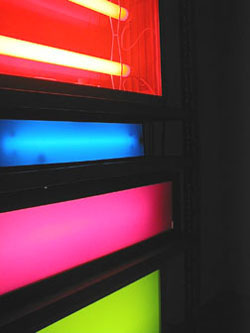 David Batchelor‘s Electric Colour Tower 666 dominates the main space. A seven meter stack of colored light boxes on a tall steel rack stretches from floor to roof beams. A cascade of black electrical cords falls down the back. Batchelor reconstructs the urban clutter of lighted signs into a modern day totem pole with an unfussy, ad-hoc functionalism. His second piece, Electric Colour Letter Box, is equally well placed, shining an eerie green light through a slot in the gallery’s front door. As in his tower, the mechanism that produces the light effect is obvious. Less mystical than the light art of James Turrell, whose effects are made to appear as if by magic, more down to earth than the techno-fetishist minimalism of Dan Flavin, Batchelor uses found light boxes from old signs, relishing the grimy mechanisms behind the pretty lights, playing one off the other in a street smart, pop-art light show.

All images are courtesy the artists. 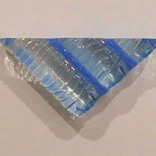