Summer is most often a down time for galleries in Texas, shirking the usual solo shows of their roster in favor of group shows of new talent. Expectedly, these shows often vary wildly if fascinatingly in quality, and Episodes, a group show of five Texas artists — Claire Ankenman, Lily Hanson, Kirk Hayes, Jeremy Red and Juvenal Reis — at Dallas’ Conduit Gallery, is no exception. 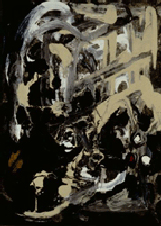 Of the bunch, the most renowned in North Texas is arguably Fort Worth’s Hayes. His paintings are rough-hewn in a very tactile way, often seemingly like crudely assimilated concepts that flirt with the vocabulary associated naïve or outsider artists. Granted, Hayes is a self-taught artist who is mining a contemporary exploration/exploitation of trompe l’oeil seemingly all by himself — his surfaces are admittedly impressive, meticulously working oil paint on signboard into textures that recall masking tape, cardboard, wood and other more sundry materials. His subject matter also drolly plays with expectations — he carefully dares to shock and mock simultaneously, eking out tableaux with faux sinister miens, like the layers of disembodied fingers in Pile to X-Cess or the young male figure bent over a chopping block in Turkey Boy.

The problem is that his work often looks merely like a high-minded attempt to mime — or worse, scorn — that very genre, like a native Californian affecting a southern accent a month after relocating to Mississippi. And it causes you to overlook what may be some of the finer, more acute points in his work. The enthusiasm of the surface doesn’t encourage you to get past its superficiality and into its depths.

In the four recent paintings included here, Hayes turns his eye and mind onto slightly more accessible subjects, and the result is more engaging. This is especially true for Battle of Midway and Leaking Vessel— two more or less maritime motifs transformed into Hayes’ comic surrealism. Strongly pictorial while only vaguely representational, both of these works exude a quixotic charm that’s rewarding.

Brazilian Juvenal Reis has been slowly making a name for himself in North Texas over the past year or so, and his works here show him exploring further his abstract vocabulary. A few come from his Strange Dialogue Series that were included in his solo at the Brookhaven College of Fine Arts last fall — some rather cryptic oil enamel and horsehair on intaglio imagery — and his newer Encrustation Series of encaustic and oil on wood haven”t made his endeavor that much more coherent just yet. There are glimpses of Reis” influences — Gerhard Richter, possibly — but Reis” work looks more as though he’s still finding what his take on modern abstraction is going to be. Luckily, he”ll continue to have more opportunities to present his works locally in the future.

The two pieces by Houstonian Claire Ankenman fall prey to a good idea that’s curiously, at best, executed. These photographically based works incorporate the artist’s own mammogram images into a series of varicolored recurring images in one case (Orbits) and a large-scale single image in another (Lunar). The results are mildly intriguing — Orbits simultaneously recalls the bright, wry silkscreens of Warhol and the fragmented frames of Stan Brakhage films, while Lunar has the otherworldly luminosity to which its title refers. What’s a little elusive is what Ankenman is trying to do with these works. Is it the personal transformed into an abstracted idea? Is it a tongue-in-cheek wink at the cold, hard world of medical imagery? Or is it something entirely more lighthearted or grave? You can’t really tell. Many artists have combined the personal, the medical, and the feminist with better results — which isn’t to imply that such is what Ankenman is shooting for here. But in the absence of any dialog with the works that encourages you to delve into their enigma, you’re a bit lost as to what these works are trying to convey after the intriguing imagery catches your eye.

When Lily Hanson displayed her nebulous foam and fabric sculptures at the University of Dallas” Ulterior show this spring, they kept good company with two artists who, although they were concerned with different sets of issues, both had their own idiosyncratic take on the natural world. In a different context with less sympathetic company— the artists in Episodes share little in common other than residing in this state — they look even more unnerving, but without the same furtive energy. They still strike with a wicked wink — Hanson’s sculptures can resemble skinned stuffed animals or, more troubling, skinned stuffed animal parts. But there’s still something a bit inchoate about them that makes them elusive, for better and worse.

What’s more, three of Hanson’s models are also included in the show; and, remarkably, because of their more diminutive size and seemingly more delicate nature, they’re far more creepy than the larger works. The change is scale presents two dramatic shifts in perception: smaller items typically seem less intimidating, and because of their materials (foam, fabric, wire), they read even more like children’s toys. But they hardly resemble anything out of children’s” world; they look more like distant cousins to the intergalactic predator of the Alien saga. And as a result, you regard them suspiciously. These are small, pseudo-personalities that could keep an adult awake at night.

The real find here is Denton’s Jeremy Red, but not necessarily for the reasons he may suspect. Red dabbles in personal snapshots of his emotional world, decorated in the feel-good, bright colors and friendly animals universe of cartoons and coloring books. His 12-inch square canvases are like comic-book panels onto which Red applies mixed media and text to create his sublime scenes. Each piece is named either Boy or Girl, and each gender marker is followed by a name. A bear couple looks fine and happy in Girl; Nikki, even if the accompanying text reads “I wish I could just forget.” It’s his basic blueprint: colorful scenes of mirthful whimsy are joined by angst-ridden fragments that sound ripped form the page of a high school diary or — worse —- a lost rambling by Soren Kierkegaard. It makes you think of the disturbing allusions to premature sexuality and repressed desire that would ensue if Edward Gorey and Lewis Carroll decided to do some work for Hello Kitty.

What’s so bewitching about these works is that — and this statement is not made sarcastically — they look and feel like somebody trying really hard to do something sincere in a specific type of wry, postmodern way, and failing majestically. It’s like he knows how to do something in a manner that will result in something very easy to read, but once he does it, what’s left is a vocabulary that’s quite mysterious. It’s a bit similar to what’s going on in contemporary underground rock, where bands are trying to recreate the temper and steel of the rock music made when they were young, but doing so in a way that’s more transmogrifying than derivative. (For instance, see U.S. Maple, Bride of No No). What results is a sound that bears no resemblance to the music that inspired it, and, even better, is ripe with more power and ferocity than the so-called originals could ever muster. As such, when Red decides to leave these quasi-pubescent fascinations behind and turn his eye to the trials and tribulations of the young adult world, he may find himself coughing up something wonderfully and intoxicatingly uncomfortable. 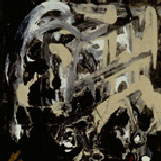